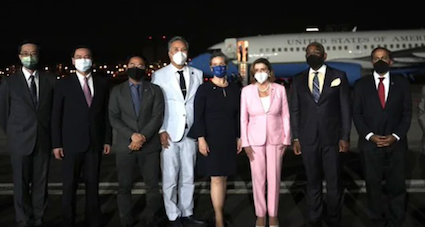 “This is a complete farce. The United States is violating China’s sovereignty under the guise of so-called ‘democracy’… those who offend China will be punished,” Wang said on the sidelines of a meeting of the Association of Southeast Asian Nations (ASEAN) in Phnom Penh.

China hit back at US House speaker Nancy Pelosi’s landmark touchdown in Taiwan late Tuesday with an unprecedented range of actions against the self-ruled island it considers its own.

Within minutes of her arrival, the People’s Liberation Army announced provocative drills and missile launches encircling Taiwan. That was swiftly followed by economic sanctions on Taiwanese agricultural goods and imports of Chinese sand.

Here are the ways China has already responded and what it could still do:

Beijing announced six exclusion zones encircling Taiwan to facilitate live-fire military drills from Thursday to Sunday. Some of the areas cross into the island’s territorial waters, threatening to disrupt airline traffic and shipping in the Taiwan Strait — one of the world’s busiest trade routes.

Early Wednesday, state broadcaster China Central Television said the country had launched joint navy and air force exercises around Taiwan. The operations will include “regular-guided fire testing in the eastern waters” — or missiles — off Taiwan, the PLA said.

China sent 21 warplanes into Taiwan’s southwestern air identification zone Tuesday, according to the island’s Defense Ministry. The daily record is 56 PLA planes on Oct. 4, which coincided with nearby US-led military exercises.

China could yet do more. The Communist Party’s Global Times newspaper said Tuesday that the PLA could strike Taiwanese military targets and quoted an expert suggesting China exercise “control” over Taiwan’s airspace and adjacent seas.

China vowed to hold diehard Taiwan “separatists” accountable and impose criminal punishments on them, the official Xinhua News Agency reported, citing an unidentified spokesperson from the Communist Party’s Taiwan Affairs Office. It didn’t name anyone, and it’s unclear how the measure will be enforced.

Chinese Vice Foreign Minister Xie Feng summoned US Ambassador Nicholas Burns on Tuesday evening for a tongue lashing upon Pelosi’s arrival, telling the envoy that his country “must pay for mistakes,” according to a CCTV post on China’s Twitter-like Weibo.

China’s US Ambassador Qin Gang, who took up his post last year, could still be recalled — he’ll need to return to China soon for the upcoming congress, giving Beijing a convenient opening. Last year, China recalled its ambassador to Lithuania after a spat over Taiwan, and in 1995 Beijing withdrew its then-US Ambassador Li Daoyu after Taiwan’s then-President Lee visited the US.

Speaking on CNN late Tuesday, Qin called Pelosi’s trip “completely wrong.” “It is a major event upgrading substantive relations between the US and Taiwan,” he added.