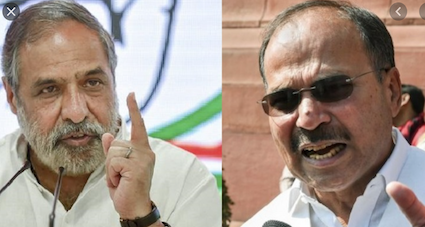 Much like the first time when the Gandhi loyalists had led a ferocious attack against the dissenters in party, this time too the G-23 club has the entire Congress ecosystem up in arms against them.

Adhir Ranjan Chowdhary, Congress president in Bengal, mouthed venom on NDTV: “They have already extracted their own pound of flesh,” said Chowdhury, “They thought to appease the party who may offer something for their bright future.”

It was not a very veiled reference to Chowdhury’s earlier rather direct charge on dissenters looking to defect to BJP, by “singing the praises of the Prime Minister,”a reference to a meeting in Jammu and Kashmir on the weekend where G-23 boss Ghulam Nabi Azad offered positive comments about Prime Minister Narendra Modi.

It wasn’t all. In Jammu itself, Anand Sharma had shown his disappointment at Congress snuggling up to a communal party, Indian Secular Front which was floated by Abaas Siddiqui, a cleric of Furfura, a famous Muslim shrine of West Bengal.

Yesterday, Mr Sharma, 68, tweeted, “Congress cannot be selective in fighting communalists but must do so in all its manifestations, irrespective of religion and colour. The presence and endorsement West Bengal PCC President is painful and shameful, he must clarify.”

Said Chowdhury: “Leaders who over the decades, have enjoyed the power of the Congress party”, now that the Congress is reduced to a far more modest standing, “they think the Congress does not have resources to offer them…so that is why they are castigating the Congress.”

Sharma decided to have his own say on the matter: “That is unfortunate. I believe in a civilised political dialogue even if there are differences or ideological issues. I have noted what Adhir babu said but I can’t become personal,” Sharma said.

Meanwhile the Congress loyalists in Jammu burnt the effigies of Ghulam Nabi Azad. Mohammad Shahnawaz Choudhary, general secretary of Congress in Jammu and Kashmir said: “He (Azad) appreciated Prime Minister Narendra Modi in our state of J&K where the people were deprived of their rights. Mr. Azad has betrayed Congress and we strongly demand that strict action must be initiated against Mr Azad. The G23 leaders want to weaken the Congress party.”

Bengal votes for its new government starting March 27. Voting will take place on eight different days and results will be announced on May 2.