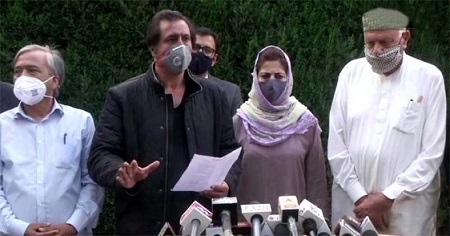 The Congress party had distanced itself from the People’s Alliance for Gupkar Declaration (PAGD) before the District Development Council (DDC) poll due to latter’s anti-India stance. Now after the polls are over, and it’s a laggard among major winning political parties, it has plans to support Gupkaris in clinching the chairmanship in 13 of 20 districts of the Union Territory (UT) of Jammu and Kashmir, as per Republic TV Network.

In November, the Congress had asserted that it was not a part of the PAGD, but is now going to join them in all districts. Congress spokesperson Randeep Surjewala had categorically denied that his party has any links with the PAGD. His denial had come after some controversial statements by Farooq Abdullah of NC and Mehbooba Mufti of PDP.

Farooq had alluded to the possibility of the Chinese intervention for getting Article 370 restored. Mehbooba, on the other hand, had said that she recognised only state flag, now scrapped, and not the Tricolour. In essence, they supported the restoration of “special status” of J and K, annulling the “merger”, so to say, with the Indian Union promulgated on August 5, 2019.

The BJP had then accused them of being anti-nationals and this had forced the Congress to part company with PAGD.

On its own, Congress is not in a position to get chairmanship in any District Development Council (DDC), winning only 26 out of 278 seats. As such, its support to People’s Alliance for Gupkar Declaration (PAGD) parties will keep it afloat politically at this level.

Prior to the DDC elections, the Congress had contested at most places against the PAGD candidates, going alone. At one time, there were discussions with the PAGD parties and it was expected to contest as a part of this alliance. After election results, it has been reduced to a mere spectator in most districts and this is the best foot forward for it.

For obvious reasons, it cannot be expected to back the BJP anywhere, trying to keep out the saffron party, wherever possible. It will first like to reach some understanding with various constituents of the PAGD. Immediately after most results were out, it has established communications with some NC leaders giving details regarding its plans.