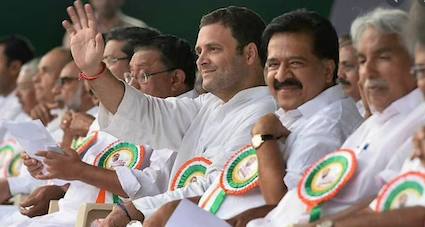 Kerala has a history where Congress and Communists exchange power every assembly elections. It’s by rote. Been so for 55 years. None other matter: It’s either UDF or LDF. But not this time, even diehard Congressmen aren’t giving the party any chance.

Now this would come as a surprise to those who remember this very Congress, with this very Soniaji and Rahulji, had won 19 of the 20 seats in the Lok Sabha polls of 2019. It was a mind-boggling sweep. But now all seems waste. All seem washed in the creeks in which Kerala abound.

Let’s first look through the prism of religion: Neither Hindu nor Muslims nor Christians seem pre-disposed towards the Grand Old Party. It has tried hard to win over powerful Nairs but its ambivalence, not forthright approach on Sabrimala, makes it a poor second to BJP.  The last Hindu face it projected as a chief minister candidate (K Karnuakaran) has been a good generation ago. That too hadn’t gone far when Karunakaran had to prematurely resign on the backdrop of ISRO spy case. Hindus of the State are unlikely to be enamoured by them.

One of the biggest jolts Congress-led UDF suffered in recent time was when Kerala Cong (Mani) split with them. Now this is a Christian party and when its chief Jose K Mani ended ties with UDF. Congress still hope for Christian votes as they have stood thick and thin with them all through last few decades. But it hasn’t happened. UDF had hoped the Mani faction joining LDF would cost the latter big. The results however suggest a completely different underpinning: Riding on the back of KC (M), LDF won the Pala municipality of Kottayam district for the first time ever, securing 17 seats in the local body.

Even the Muslim factor doesn’t seem to align with them. Over the last two decades, the CPI(M) has worked hard to attract the Muslim votes to its side and that can be seen in the fact that three of its key ‘youth’ leaders in Kerala — Rahim, Shamseer, and Riyaz — are Muslims.

Infighting that big bane of Congress

Then there is this infighting in the Congress camp The factionalism, the notorious age-old “A” and “I” rift is now wide open. The “I” group is led by Ramesh Chennithala, leader of Opposition in the Kerala assembly; and “A” by former chief minister Oommen Chandy.

The resignation of PC Chacko is too recent a wound to heal in a hurry. The veteran leader left the party due to this factionalism. But all this is not a solitary instance. Congress general secretary Vijayan Thomas too was fed-up with this infighting and quit the Congress state unit. When Chacko bluntly told the press, things were so bad that even the Congress’s central leadership in Delhi had thrown up their hands and surrendered decision-making to the two competing factions, it brought the fact that the party has stopped even doing the formality of “introspection” to the surface.

The matter turned worse when the resignation of two top leaders changed in mass resignations by Congress office-bearers in Kollam district just because of a rumor that Bindu Krishna, a popular local leader might be denied a ticket to Kollam city seat by the ‘A’ faction.

After all this, the party got another blow when Muhammad Nahas the state youth wing president of the Revolutionary Socialist Party (RSP), a Congress-ally, quit the RSP and joined the BJP.

Congress has been missing in action

In the past 10 years, Congress has turned extremely complacent in Kerala. After the “Solar Scam”, the party lost the state and when Pinarayi Vijayan came to power, it did nothing other than play mute spectator to the events in the State. Be it the natural calamities or the pandemic, Congress has been missing in action. Corruption and lack of growth of young leaders is all contributing to its terminal decline.

The recent CVoter survey suggests that if elections were held now, the LDF would easily win the election with 80-90 seats and 41-43 percent of the popular vote, breaking the five-decade-long tradition. It’s senior leader Kapil Sibal too has said: “People don’t see Congress as an alternative to the existing government.).

If the Congress loses Kerala, which now seems to be a real probability,  it would have far-reaching consequences for the party nationally, hastening its impending oblivion.

Two questions would most likely haunt Congress after the assembly results are out on May 2:

First, if Congress can’t even win an election it is supposed to by the force of history, which election can it win?

Second, How did they mess up so soon when in the national parliament, the Congress-led alliance just won 19 out of 20 seats?