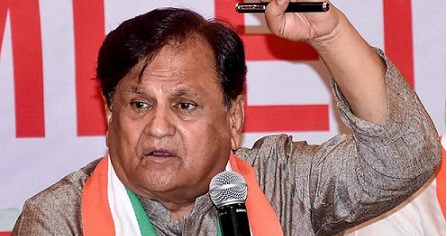 The BJP may gain a Rajya Sabha seat in Gujarat from the Congress which was held by its senior leader Ahmed Patel. The Congress had waged a tough contest for this seat to ensure Patel’s victory in the year 2017. However, after Patel’s death on November 25, the seat was declared as vacant the same day.

Within a week of Patel’s demise, a sitting BJP member, Abhay Bhardwaj, had also died on December 1, leading to another vacancy. The Election Commission has now decided carry out two separate bypolls to fill up these vacancies. In case of separate elections, the BJP is likely to win both the seats

In the 182-member Gujarat assembly, the BJP has 111 MLAs and the Congress 65. Any candidate getting the votes of more than half the MLAs gets through to the Rajya Sabha.

The Congress wants the bypolls for both the vacancies in the Rajya Sabha to be held together. However, the government has said that since 2009, the EC has been holding separate notifications for by-polls to the Rajya Sabha.

The Congress is likely to approach the EC arguing in favour of a single notification for both the seats. The Congress has challenged the election of S Jaishankar to the Rajya Sabha on similar grounds. The apex court has not given its verdict in the case so far and a reduction of one seat in the Rajya Sabha is a likelihood the Congress is faced with.