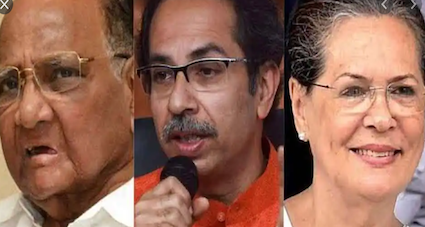 A few days ago, Sharad Pawar met Prashant Kishor giving rise to the speculation that the Nationalist Congress Party (NCP) is having national ambition of wresting the power from the Bharatiya Janata Party, bringing all the Opposition ranks under his umbrella.

This ambition kind of got a fresh coating when during the 22nd anniversary of his party’s formation, Pawar heaped praise on Shiv Sena and said that the Maha Vikas Aghadi experiment in Maharashtra would be repeated in next assembly polls as well as in Lok Sabha elections in 2024.

Well, all this pipe-dreaming has taken a nose dive after Maharashtra Congress chief Nana Patole announced on Saturday that Congress would go it alone in all local body and assembly elections, going forward.

Addressing Congress workers in Amravati’s Tivasa, Patole said: No amount of sidelining will make Congress go. For good effect, he made sure that Sharad Pawar got the message.

“I don’t know what he (Sharad Pawar) said but Congress has made it very clear that we will be going solo in all local body elections and assembly polls.”

Patole also made his displeasure known for Pawar’s recent praise for Sena. “Congress is the original party. We don’t need anybody’s certificate. Even if somebody (Pawar) is sidelining us, that doesn’t mean Congress will be sidelined. Congress will only remain the top party in Maharashtra by 2024.

Congress has reasons to be miffed by its two alliance partners in Maharashtra. It has got lightweight departments to control in Maharashtra and both its allies humiliate it in public from time to time.

Sena has often clashed with its ideologically opposed Congress since the formation of the alliance over issues of Hindutva, CAA, NRC, Ram Janmabhoomi, Savarkar and Covid-19.

A few days ago, a State Congress leader announced the lockdown plan which the Maharashtra government had in mind for the State. Prompt came the refutation from the Sate Chief Minister’s office—only the same plan was implemented a day later!

Shiv Sena in the past has termed Congress as no better than creaking bed. It has also termed it as Grand Old Lady. Congress have accused Uddhav Thackeray of being more dependent on bureaucrats than his alliance partners, alleging they were being “sidelined.”

Meanwhile, Pawar remains on a trip of his own. He is predicting the MVA government would last its full five-year term.

“We have established a government having a different idelogy. No one would have imagined that Sena and NCP can work together. But we did it and fortunately, people have liked the experiment.”