Congress would’ve a ‘relook’ at abrogation of Article 370 once in power: Digvijaya Singh 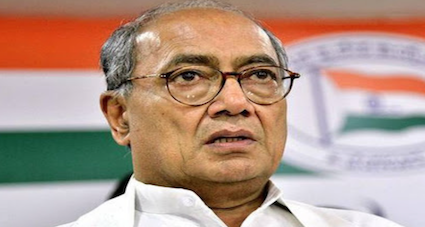 In a shocking leak of a Clubhouse chat, Congress leader Digvijaya Singh has promised to a Pakistani journalist that his party would have a “relook” at the decision to abrogate Article 370 in Jammu and Kashmir by the Modi government.

“Democracy was not there in Kashmir when they revoked Article 370. Insaniyat (humanity) was not there because they put everyone behind bars. And Kashmiriyat is something that is fundamental to secularism. Because in a Muslim-majority State, there was a Hindu Raja (king).

“Both worked together. In fact, the reservation in Kashmir was given to Kashmiri Pandits in government services. Therefore, revoking Article 370 and reducing the Statehood of J&K is an extremely sad decision. We (Congress party) will certainly have to relook at this issue,” said Digvijaya Singh.

In a Club House chat, Rahul Gandhi’s top aide Digvijaya Singh tells a Pakistani journalist that if Congress comes to power they will reconsider the decision of abrogating Article 370…

Digvijaya Singh, presently a member of parliament, also general secretary of the All India Congress Committee, was chief minister of Madhya Pradesh twice.

Digviyaja was speaking to Shahzeb Jillani, a Pakistani journalist presently residing in Germany. In the chat, Jillani had claimed that he was shocked at the changing landscape of politics under the Modi regime. He claimed that the abrogation of Article 370 has strained the relations between India and Pakistan.

“If and when this government goes and India does get rid of PM Modi, what will be the way forward on Kashmir? I know it is on the margins because of what is going on in India right now. But this is an issue that has existed between the two countries for so long,” Shahzeb Jillani had asked Digvijaya Singh.

While speaking against religious fundamentalism, it surely didn’t cross the mind of Digvijaya Singh to remember the exodus of Kashmiri Pandits from the Valley in 1990s. He allegedly said that Hindus of the valley were treated well by the Muslims of the state, completely overlooking the facts to the contrary.

The Modi government had abrogated Article 370 in Jammu and Kashmir on August 5, 2019 in order to fully integrate the region with the rest of country. The state was divided into two Union Territories, Ladakh and Jammu and Kashmir, under Jammu and Kashmir Reorganisation Act. It came into effect on October 31, 2019.

Kanye West, the US rap star known for courting controversy, has stoked a new wave of outrage, accusing Black Lives Matter of being a “scam” after...