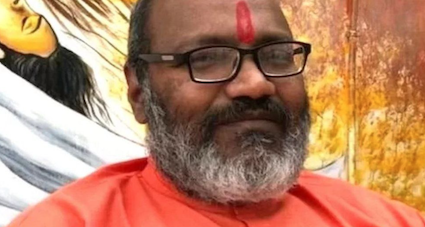 Seer Yati Narsinghanand, in the eye of a storm, now has his own say on the hate-speech controversy surrounding him.

Speaking to Republic TV, Narsinghanand said that he is the marked man of forces against the country.

The seer has been accused of stating in Hindu Mahapanchayat in Delhi recently that “50% of Hindus will convert” in a period of 20 years after a Muslim becomes the Prime Minister.

Defending his remarks, Narsinghanand alleged, “If a Muslim becomes the PM of India, the Hindus in India will suffer the same fate as what happened with Hindus in Pakistan, Afghanistan, Iraq, Iran, Saudi Arabia and Kashmir”.

The chief priest of the Dasna Devi temple was granted bail in the Haridwar Dharam Sansad hate speech case in February this year. When asked about the case registered against him by the Delhi Police, the seer claimed, “They will put me in jail and kill me. I have no issues. But I will continue to say the truth. Hindus are in danger in India”.

Responding to the Delhi Police’s revelation that the event wasn’t granted permission, Narsinghanand added, “Yesterday when I went there, there were so many Delhi Police personnel. Why didn’t they stop? Today, they are saying this. Why didn’t they stop this if they could have done so? I was a guest and not the organiser. If you check the record, I was sitting there for a maximum of 15 minutes”

In a statement at the controversial ‘Hindu Mahapanchayat’ function, the Delhi Police said, “The request was denied on the ground that the organiser had no permission from the land-owning agency — Delhi Development Authority — for organising this sabha at the Burari ground. Despite the denial by Delhi Police, on Sunday, organiser Preet Singh reached the Burari ground with his supporters in the morning and started organising the Hindu Mahapanchayat Sabha. Around 700-800 people gathered at the event place and the invitees of the organiser started delivering speeches from the stage.”

Subsequently, a case was registered at the Mukherjee Nagar Police Station under Sections 188 (disobedience to order duly promulgated by public servant) and 153A (promoting enmity between different groups on grounds of religion, race, place of birth, residence, language, etc. and doing acts prejudicial to maintenance of harmony) of the Indian Penal Code.

Meanwhile, the police mentioned that no arrests have been made yet. It also specified that legal action is being taken against those spreading rumours and misinformation using various platforms, including social media.