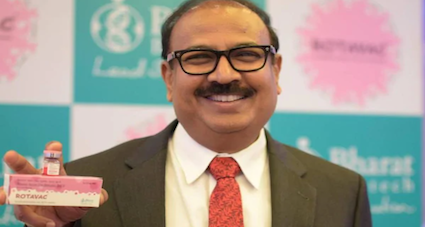 The chairperson of Bharat Biotech has claimed that his company’s Covaxin is the only one which could be given to children and even the United States want it.

Dr Krishna Ella spoke to Republic TV after Covaxin was approved by experts to be given to children between 2-18 years. “Many countries want our vaccine (COVAXIN), including the US. The reason is that this is the only vaccine that can be given to children. The safety pattern is so good that it can be given from a two-year-old child to an 18-year-old as well. COVAXIN is made of old technology, and old is gold. Whereas, other vaccines don’t know what will happen to the children, COVAXIN is safe and it is enough for the protection of the people.”

He added: “It is easier to vaccinate children but it is rather difficult to vaccinate adults as they are more sensitive. A lot of countries want this vaccine, but first, we will wait for the phase three trial to end, and then we can go aggressively ahead.”

Covaxin was on Tuesday recommended by an expert panel for phase II/III clinical trial on those aged between two to 18 years. The trial will take place in 525 subjects at various sites, including AIIMS, Delhi, AIIMS, Patna, and Meditrina Institute of Medical Sciences, Nagpur.