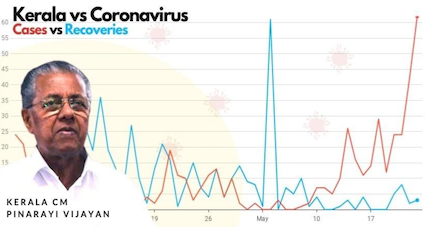 If Minister of State for External Affairs V Muraleedharan is to be believed, Kerala is responsible for its own surge of Covid-19 infections.

Speaking to Republic TV, Muraleedharan accused the Pinarayi Vijayan’s Kerala government for refusing to follow the ICMR’s guidelines of test, track and treat. He claimed that Kerala government followed its own method of tracing, tracking and then treating. He opined that it was the reason for spurt in Covid-19 cases as the method was unscientific. He also blamed the relaxations which Kerala government indulges in to appease the minority for vote-bank politics.

“The Kerala government has tried to utilise this pandemic for political benefits and that’s the whole purpose of these relaxations. In fact, there was fake propaganda right from the beginning of the pandemic when the state government claimed that they have contained the COVID-19 due to their effective management,” said Muraleedharan.

The minister also hit out at Congress, the main opposition party in Kerala. He said the troublesome issue of the pandemic was never raised in the assembly. And that’s because, he said, the UDF is headed by Congress and one of its ally is Indian Union Muslim League (IUML).