Covid-19 martyrs: Does Kejriwal discriminate in dispensing the compensation promised? 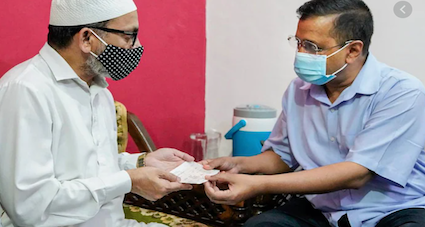 Does Delhi chief minister Arvind Kejriwal discriminate in dispensing the compensation he announces for casualties suffered in this pandemic?

A report, making a peg of a letter from a deceased Police constable’s wife has highlighted that Kejriwal’s government rejected claims filed by 12 of 15 families of police personnel who died of Coronavirus while on duty. The remaining three are pending too after a year.

Pooja, wife of deceased Police constable Amit Kumar Rana, has now come forward and said not a penny has been paid to her despite Kejriwal’s promise of Rs 1 crore as compensation to those who died serving people on the field.

She has written a letter to Kejriwal, reminding him that while others have received their compensation promised, she is yet to receive her share. She has mentioned the name of select few families who received the compensation amount recently.

Pooja has termed it discrimination against her and her family.

Amit Kumar Rana, who had succumbed to the Covid infection on May 5, 2020, was the first Covid casualty in the police force. It’s been over a year now.

Reminding the CM of his commitment, Pooja wrote in Hindi, “My husband was a martyred corona warrior, and succumbed to the pathogen while serving the people of Delhi. I was filled with sorrow and dejection. In that hour of grief, acknowledging the sacrifices made by my husband, you assured me financial help of Rs 1 crore. You announced the same on Twitter and in front of the entire media. That gave me some hope. However, we never received that amount.”

“Some families received help within 10 days then why this discrimination with me? I have a four-year-old son and a four-month-old daughter. I am worried about their future. If a Chief Minister doesn’t fulfil his promises, I might never be able to trust anyone else. Waiting for justice,” wrote Pooja, expressing her disappointment at Kejriwal’s indifference.

On May 23, Delhi Chief Minister Arvind Kejriwal met the father of Dr Anas Mujahid (se image) and handed him over a cheque of Rs 1 crore. While speaking to Mujahid’s father Kejriwal said, “Many Covid warriors like Dr Anas are on the frontline helping the people of Delhi and it is because of them that we are able to save lives and the Delhi government is able to fight the pandemic.