CSS schemes for Scheduled Caste, not converts: Centre to AP 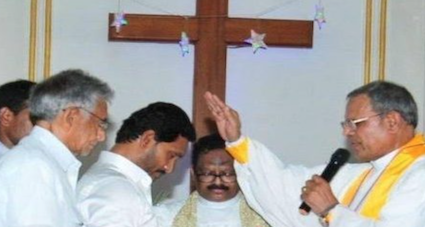 The central government on Tuesday informed that Centrally Sponsored Schemes (CSS) for the welfare and development of Scheduled Castes will not be extended to any other individual who professes a religion different from the Hindu, the Sikh or the Buddhist religion, as individuals from only these religions will be deemed as member of a Scheduled Caste.

The response from central government come after Andhra Pradesh government decided to extend benefits of CSS to Scheduled Caste people converted to Christian and to Buddhism.

YS Jagan Mohan Reddy-led Andhra Pradesh has been accused of encouraging conversion activities by spending huge money on the services Christian community. The freebies are not only causing a loss of public money, but these appeasement schemes are also aimed at encouraging ordinary Andhra citizens to convert, experts suggest.

Last year, A Hyderabad-based non-governmental organisation, Legal Rights Protection Forum (LRPF), has petitioned President Ram Nath Kovind against Andhra Pradesh government stating that major benefits that have been categorised under ‘non-statutory benefits’ have been extended to those from Scheduled Castes (SCs) who had converted to Christianity and Buddhism.

They had also pointed out an alleged scam taking place under the state government scheme to provide honorariums to all religious service rendered in the state.