Dahiya settles with a silver; India bags its fifth medal in Tokyo Olympics 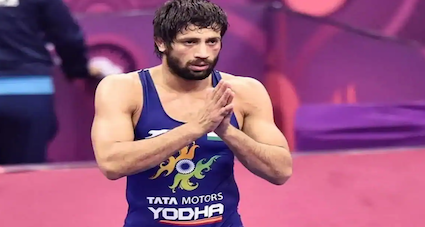 Indian wrestler Ravi Kumar Dahiya bagged the silver medal after losing in the final of men’s 57kg freestyle category to Russian Olympic Committee’s (ROC) Zavur Uguev on Thursday. This is India’s fifth medal at the Tokyo Olympics and the second silver of the campaign. Ravi became the second Indian wrestler, after Sushil Kumar, to get a silver medal in the Games.

In the gold medal match, Uguev took an early lead by pushing Ravi out of the circle twice. Ravi bounced back with a takedown from the left, but Uguev restored his lead to go into the second period with a 4-2 advantage.

The Russian extended his lead to 5-2 and then inflated it further with another takedown. Ravi gave his best to break the solid defence of Uguev and reduce the margin to 4-7. However, he could not stop Uguev from achieving the rare honour of being a World and Olympic champion.

The 23-year-old Indian had beaten Bulgaria’s Georgi Vangelov in the quarters (14-4) and Colombia’s Oscar Tigreros in the round of 16 (13-2) by technical superiority.