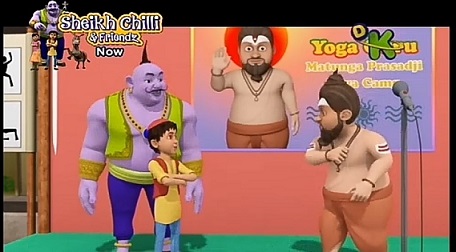 A cartoon show “Sheikh Chilli and Friendz”, being telecast on Doordarshan on DD National, has created a controversy for a Hinduphobic episode. It mocked the time-tested tradition of Yoga and depicted Hindu Sadhus in an insulting manner. Sheikh Chilli, apparently depicted as a Muslim, is shown humiliating a Yoga Guru with the help of fictional Gennie.

In the episode, Sheikh Chilli and his friends, along with Geenie, challenge a Hindu Sadhu performing Yoga. Incidentally, June 21 every year is being organised as the “International Yoga Day” for the past couple of years. Several countries across the continents now recognise the practice of Yoga and participate in this function.

Contrary to facts, Sheikh Chilli mocks and attempts to discredit the practice of Yoga and in this subtle manner the episode seeks to promote contempt against Hindus. This annoyed many who watched this programme. In fact, the makers of the serial have gone onto depict the Hindu Yogis as “witches”. This demeaning portrayal of the Yoga and Hindus using state resources, Doordarshan, was flagged by many who saw the programme.

The programme, Sheikh Chilli and Friendz, has now been taken off air by Doordarshan, according to Shashi Shekhar Vempati, Chief Executive Officer, Prasar Bharati. Co-produced by Apsons Entertainment Pvt Ltd., the serial revolves around the adventures of a boy Sheikh Chilli and his friends, of Jhunjhun Nagar.

In August this year, Discovery Kids had partnered with Doordarshan to telecast some episodes of several of its cartoon serials. As part of this programme, Little Singham, Kisna and Shiekh Chilli and Friendz, were being telecast at 8 am every day on Doordarshan.

As the video of the episode of Sheikh Chilli insulting the Yoga tradition became viral, several netizens slammed the state broadcaster for promoting anti-Hindu propaganda.

One person named Rahul who tweets at @BiharKaLall said: What is DD NATIONAL doing broadcasting such rubbish made by Discovery Kids? Another, Ajay Agrawal @ajay_nest said: Mockery of respectable saints and gurus is unacceptably. This programme is #SheikhChilli. Sad that it is being telecast on DD NATIONAL. Pls look into this.  One user named Pawan Sharma asked a very pertinent question whether DD National wanted their children to believe in some false Gennie rather than Yoga.