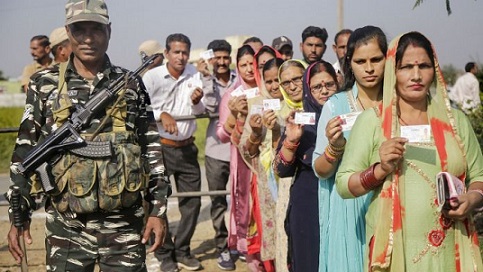 It is for the first time that District Development Council (DDC) elections are being held in the Union Territory (UT) of Jammu and Kashmir. That will lead to three-tier panchayati raj system being put in place as it is prevalent all over India. The voters most excited are West Pakistani Refugees (WPRs), Valmikis and Gorkhas participating in any local elections in J&K for the first time.

Believe it or not, they were not allowed to vote for the Legislative Assembly, panchayats or Urban Local Bodies (ULBs) earlier due to Article 35 A and Article 370. These people were Indians living in J&K for decades but not given the status of Permanent Residents (PRs). As non-PRs, they were kept out in all local elections though they voted in all Lok Sabha elections.

This was a unique case of disenfranchisement and they suffered this ignominy silently. The so-called “special status” of J&K conferred this special disability on them and they had no remedy or escape. In many villages, West Pakistani Refugees were the only inhabitants. In some panchayats, they had to request some PRs to become their representatives!

The People’s Alliance for Gupkar Declaration (PAGD) leaders have talked of restoration of special status of J&K in their speeches. The National Conference, the People’s Democratic Party (PDP) and others can’t expect to get any of their votes for obvious reasons. However, it is also a fact that all disenfranchised groups are Hindus, Sikhs and Christians living in Jammu region. No Muslims settled anywhere in J&K were impacted by the PR laws which was the root cause of disenfranchisement.

In 1959, or earlier, a group of Tibetan Muslims entered the then state and they were settled in Srinagar city. The state government then conferred PR status on them and absorbed them in the mainstream. This way, blatant discrimination between Muslims (facilitating their settlement) and others (debilitating them) was practised in J&K.

The corrective steps began on August 5, 2019, when 35 A was scrapped and 370 was restated. In 43 DDC segments, located both in Kashmir and Jammu regions, 296 candidates are in fray. In the first phase, far-off areas, which are likely to see heavy snow and bad weather as winter progresses, are being taken up. The ballot boxes and polling staff was sent to many areas in Doda, Kishtwar and Bandipora districts using Pawan Hans helicopters.

Incidentally, since Electoral Voting Machines (EVMs) are used in most elections, with ballot boxes phased out, these boxes were brought in from Haryana and Chhattisgarh for the DDC polls. This is also the first electoral exercise in J&K where special protocols due to corona pandemic have been ordered.

Simultaneously with DDC elections, an electoral exercise is also on to choose panches and sarpanches in many constituencies. So far, 768 candidates have been declared elected unopposed. Of them, 36 are sarpanches and 732 panches while elections are being held on Saturday for electing 94 sarpanches and 368 panches. In all, 12,153 panches and 1,088 sarpanches will be elected during eight phases.