DDC Polls: First phase has put to rest the fear of poor turnout of voters 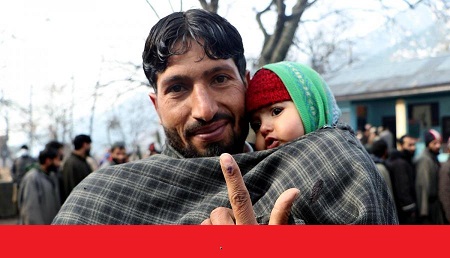 The first phase of polling for District Development Council (DDC) on Saturday saw 52 per cent voters exercising their franchise. The difference in percentage of voting in the two regions was stark: Jammu segments reported 64% voting while it was 41% in Kashmir. The reason for calling it stark is that seven Kashmir-based parties are fighting these elections together, calling themselves as People’s Alliance for Gupkar Declaration (PAGD).

Does this 41% voting in Kashmir reflect their collective reach that together they can mobilise only this many voters? That is a legitimate question but it is a reasonably healthy percentage when we consider the past. Incidentally, in Lok Sabha elections in 2019, Srinagar had seen barely 14% voting and seen Farooq Abdullah of the National Conference emerge victorious.

Reasi district in the Jammu region recorded the highest polling percentage of around 75%, scoring a distinction, so to say. In Budgam in Kashmir, the polling percentage stood touched 57%. The far-off and remote districts in both the regions, like Kupwara and Poonch recorded 51% and 69%, a reflection of the enthusiasm among voters. Severe cold and Covid-19 protocols failed to dampen the spirits as they lined up near the polling booths.

This percentage of voting was a welcome development as there were doubts in some quarters about participation in the first vote after scrapping of Article 35 A. The PAGD parties, a loose alliance among seven parties of Kashmir, have an avowed objective of restoration of special status of J&K. If that happens, DDCs can theoretically vanish for three-tier panchayati raj was not implemented by any of them when in power.

Some people in some Delhi offices seem to have a rather evolved sense of humour if one carefully sees the number of DDCs and MLAs in the new legislative assembly. In 20 districts, at the rate of 14 DDC segments per district, there are a total of 280 DDC segments. The new assembly will have 90 MLAs whenever it is constituted. Add them together and you get the magical figure of 370!

Earlier, there were only 87 MLAs in all districts of the Union Territory (UT) of Jammu and Kashmir. Now, there will be 280 DDC members to give a to jostle for the attention of the ordinary people to compensate with the MLAs. With the power of the legislators vastly curtailed, the DDCs can sure emerge alternative power centres. This deepening of democratic institutions at the grassroots can only be welcome for the people.

It sure is magical for PAGD alliance partners who papered over their deep differences and 370 is the glue that holds them together. It seems the figure is equally magical for the BJP too which is on the other side of divide and which did away with soul of 370. It sure doesn’t look like a three-digit figure anybody is going to forget in a hurry. Pick up and decide whichever side of the divide!