Dead bodies in Ganga: Images being circulated belong to 2015 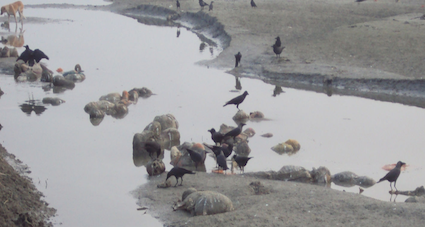 While many decomposed bodies were found floating in the Ganga in the last couple of days, several media houses have used images from 2015 on social media to support their report.

Aam Aadmi Party MP Sushil Kumar Gupta shared the photo on his Facebook page in which dogs can be seen scavenging on the dead bodies. He claimed that these images are from Bihar where almost 500 dead bodies were seen floating in the river. The same image was shared by several other social media users too.

However, it was found that the images were from 2015. The photo as per Getty images was taken on January 14,  2015, by The Hindustan Times.

Even the ANI had tweeted the same image in 2015.

Asianet News Network, a Malayalam language news channel also used the same image however, they had apologized for spreading the misinformation.

Apart from that, recently a report claimed that several bodies were found buried in the sand on the banks of Ganga.

However, Raebareli ADM (E) Ram Abhilash has debunked the reports and claimed that the viral video is “misleading and false”. ANI has quoted him saying that the team consisting of ADM, local police, and SHO found nothing on inspection on the ghats.