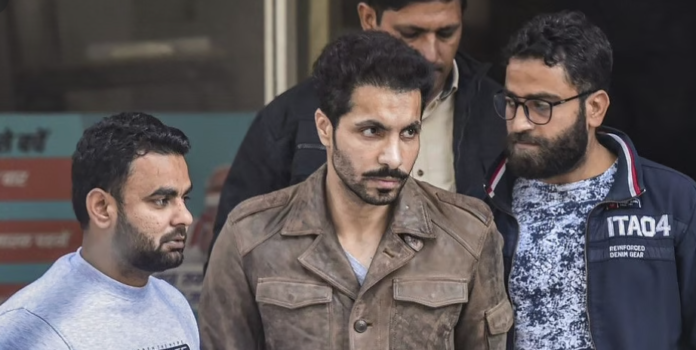 Deep Sidhu, the actor on the run for his deed at Red Fort on Republic Day, as arrested from Karnal in Haryana on Tuesday while he was waiting for someone to pick him up.

Sidhu, actor-turned-activist, was remanded to a seven-day police custody after he was produced in a Delhi Court. According to media reports, originally the police had sought a 10-day custody which was reduced to seven days.

Sanjeev Kumar Yadav, DCP Special Cell, said: “He will be handed over to the Crime Branch at the Tis Hazari court. He was changing the location since the time he fled away, after descending of the national flag happened at the Red Fort,” Yadav said.

Sidhu had an award of Rs 1 lakh on his arrest along with information on Jugraj Singh, Gurjot Singh and Gurjant Singh and Rs 50,000 each for the whereabouts of Jagbir Singh, But a Singh, Sukhdev Singh and Iqbal Singh.

All have been accused in various FIRs registered over the violence.

Sidhu had owned up the hoisting of the Nishan Sahib flag at the Red Fort during tractor rally on January 26.

Along with Sidhu, a reward of Rs 1 lakh had also been announced for information on Jugraj Singh, Gurjot Singh and Gurjant Singh, and Rs 50,000 each for the whereabouts of Jajbir Singh, Buta Singh, Sukhdev Singh and Iqbal Singh.

All the accused have been named in several FIRs registered over the violence.

Sidhu had claimed responsibility for hoisting the Nishan Sahib flag at the iconic Red Fort during 26 January’s tractor rally.

Deep Sidhu, a Khalistan advocate, came to limelight after a video of his in which he claimed the farm laws were intended to snatch the land of farmers for corporates went viral. The known baiters of Modi government—Aam Aadmi Party, Congress, social media activists and Lutyens Media—backed him to the hilt.

Sidhu was called a “son of farmer” and the general public was made to believe he had been at the forefront of the farmers’ protest from the beginning. The fact was also made light of that he had refused to condemn Khalistani terrorist Jarnail Singh Bhindranwale in an interview to Barkha Dutt.

Sidhu was continued to be lauded by the activists against farm laws. On India’s 72nd Republic Day, he was part of the mob that desecrated the Indian tricolour and unfurled the religious Sikh flag.

All of a sudden, the activists who were hailing him, now began to term him as a BJP man. This photographs with actor BJP MP Sunny Deol began circulating in social media. This was despite Sidhu had revealed he had nothing to do with the BJP. He also expressed regret for campaigning for Deol in his personal capacity ahead of the Lok Sabha polls of 2019.  As days passed and Sidhu wasn’t arrested, it was wildly charged that the Union government was shielding him.

And now that he has been arrested, several activists are seeking Sidhu’s release on social media.