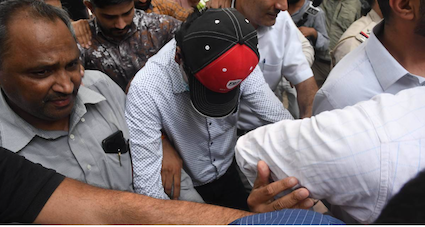 Zubair completed his four-day police custody today, having been charged under sections 153 A (promoting enmity between religious groups) and 295 (injuring or defiling a place off worship with intent to insult the religion of any class) of the IPC.

Zubair had been arrested for allegedly posting derogatory comments about Hindu gods and goddesses. Advocate Vrinda Grover pleaded on his behalf for bail, claiming the investigation in the case was already over.

The public prosecutor Atul Shrivastava though looked for 14 further days of judicial custody, claiming that the Police has now added new provisions.

The proceedings today came a day after the Delhi High Court issued notice to the Delhi Police on a plea by Zubair challenging the Patiala House Court order remanding him to police custody. Zubair also took objection to the court order permitting the examination and seizure of the laptop of Zubair.

Earlier, the Police had taken Zubair to his Bengaluru residence to confiscate his laptop and other electronic items that he used to post derogatory posts on social media. According to the reports, Zubair had refused to hand over his electronic devices and had formatted them. The Police said that despite repeatedly asking for the devices, Zubair had refused to hand his devices over to the Police. But the Police on June 30 recovered his laptop and said that it would be sent for forensic examination at CFSL, Rohini.

The Enforcement Directorate (ED) has also sought the bank account details of alleged fact-checker Mohammed Zubair. The central agency has asked for First Information Report (FIR) and remand papers from the Delhi police. ED will scrutinise Zubair’s bank account details to check for money laundering. According to the Delhi Police, Zubair’s AltNews has received donations through Razor Pay from countries like Pakistan, Syria and Australia, which required thorough investigation.

Mohammed Zubair was arrested  on June 28 by the Delhi Police for hurting religious sentiments via derogatory social media posts targeting Hinduism. He was booked under Sections 153A and 295 of the Indian Penal Code.

The FIR was based on a tweet by Twitter user @balajikijaiin where the user had shared a screenshot of an old tweet by Zubair in which he had mocked Lord Hanuman. In the tweet, @balajikijaiin had tagged the Delhi Police and asked them to take action against Zubair for hurting the sentiments of Hindus with his derogatory post against Lord Hanuman.