Delimitation: Abdullah’s party now preening on principles is so shameless in light of history 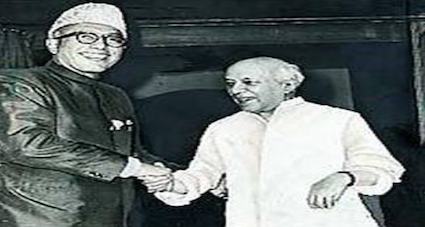 Thursday. Besides Rana, Surjit Singh Salathia and Gujjar leader from Mendhar Javed Rana were also among those who met the commission.

The NC leaders submitted a memorandum to the commission defining what expectations their party had from it. The two-page memorandum was well drafted and spoke of principles that must guide the commission.  “Any Delimitation process has a vital role in empowering each constituent to be an equal share holder in the process of democracy so that each one feels empowered and not feels relegated, isolated, disconnected or disempowered,’’ it said at one place in the memo.

For good effect, it added: “Delimitation Commission shall work in the most transparent , judicious and fair manner providing  justice to all in delimiting the constituencies as per the constitutional framework based on the basic tenants of Delimitation – population, geography, topography, area, physical features, contiguity, convenience of administrative units and facilities of easy communication and approachability of public convenience.’’

Admirable words, one must say, on the face of it. The words ring hollow when one looks back as the party’s founder, Sheikh Mohammad Abdullah, had cheated the Jammu region and disempowered it politically in the most devious manner in 1951 when the first delimitation happened. This delimitation was to carve out segments for Constituent Assembly which had 75 members.  The Jammu region was allocated only 30 seats in the 70-member House and Kashmir was given 43, and Ladakh two.

This distribution was not done in a fair manner but by gross gerrymandering engineered by Sheikh Mohammad Abdullah. No documentation is available regarding the carving out of the segments, the names of officials who did it, and so on. What is known about this unique election and run-up to this election is that the NC cadres were actively involved in them! The constituencies were carved out the way they were by the NC cadres and they also supervised the electoral process.

Let us see what would have been the number of seats in Kashmir, if as in Jammu, each seat were to be carved out of at least 48,618 people. This would have meant 17,12,964/48,618= 35.23, rounded off to 35. That means the Kashmir region would have got only 35 seats and not 43 as it was given by sheer force of political power and ignoring every tenet of justice and fair play.

This grossly unequal and unfair treatment of the two regions gave an upper hand to Kashmir. The Jammu region was thus deliberately disempowered politically ab initio, from day 1 as it were, and it has suffered ignominy at the hands of Kashmir-centric politics and policies. All this was possible because the entirely free hand that Sheikh had in running (rather ruining) the affairs of Jammu and Kashmir. This free hand and all arbitrary conduct of Sheikh had the sanction and backing of Indian Prime Minister Jawaharlal Nehru.