Democrats ‘control’ of US media is a tyranny, says a ruling Judge 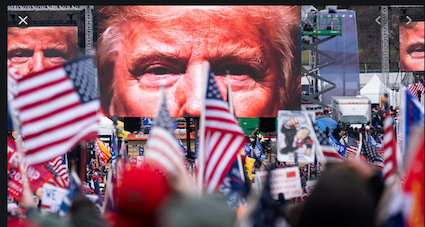 The American people are presently trapped in a Catch-22 situation in that any criticism that is levelled against the U.S. mainstream media is channeled away from social discourse by the very institutions under attack.

A prominent DC circuit judge has delivered a scathing attack on the Democratic Party’s “ideological control” of the U.S. media landscape. Yet who will heed the call if legacy and social media are empowered to suppress news and debate at will?

Donald Trump, the first sitting president in U.S. history to have had his voice deliberately blocked from reaching the American people, is not the only one who has a beef with the control-freak liberal media. Senior Circuit Judge Laurence Silberman, 85, appointed in 1985 to the U.S. Court of Appeals by Ronald Reagan, thrust the question of liberal media bias into the spotlight during an otherwise ordinary  libel case.

Silberman took umbrage against the 1964 court case New York Times v. Sullivan, which made it incumbent upon those parties looking to sue media outlets to prove that the latter’s reporting was the result of “actual malice,” or a “reckless disregard for the truth.” That ruling, critics say, has made it exceedingly difficult to hold media outlets accountable for what Trump regularly denounced as “fake news.”

From there, Silberman launched into an attack on the “power of the press” that made Trump’s Twitter tirades look absolutely tame by comparison. And the honorable judge, whose  reputation is held in high esteem by many in Washington, was naming names.

“Two of the three most influential papers (at least historically), The New York Times and The Washington Post, are virtually Democratic Party broadsheets,” the right-leaning judge declared. “And the news section of The Wall Street Journal leans in the same direction. The orientation of these three papers is followed by The Associated Press and most large papers across the country (such as the Los Angeles Times, Miami Herald, and Boston Globe).”

“Nearly all television-network and cable-is a Democratic Party trumpet,” he added.

Silberman then made passing reference to Rupert Murdoch, 90, who owns that boney strip of media byproduct that speaks on behalf of conservative values, namely Fox News, The New York Post and the Wall Street Journal’s editorial page. Amid ongoing efforts by the masters of the media universe to silence even this last bastion of Republican thought, the judge warned, “[I]t should be sobering for those concerned about news bias that these institutions are controlled by a single man and his son [James Murdoch]. Will a lone holdout remain in what is otherwise a frighteningly orthodox media culture?”

Meanwhile, Silicon Valley’s social media powerhouses, like Twitter and Facebook, did not escape the wrath of Silberman, who, while acknowledging that these were private enterprises and therefore beyond the immediate purview of the First Amendment, emphasized that that was not an acceptable excuse for “big tech’s bias.”

“Repression of political speech by large institutions with market power therefore is-I say this advisedly-fundamentally un-American,” the judge wrote in a footnote to the case. “As one who lived through the McCarthy era, it is hard to fathom how honorable men and women can support such actions.”

Indeed, what has come to pass since the age of McCarthyism has far more severe implications with regards the survival of U.S. democracy in that the opinions of one half of the electorate have been effectively shut down, cancelled, as it were. With increasing regularity the Republican Party is forced to accept the judgment of the mainstream media, which is delivered in the form of its ironclad silence when the interests of the Democratic Party are at stake.

One significant example occurred in October with presidential elections just weeks away when The New York Post  published a shocking story on how Hunter Biden reportedly introduced his father, then-Vice President Joe Biden, to a top executive at a Ukrainian energy firm. This was said to have occurred less than a year before the elder Biden pressured government officials in Ukraine into firing a prosecutor who was investigating the company.

Silicon Valley quickly swung into action as Facebook limited exposure of the story on its platform to, somehow, give its fearless fact-checkers time to investigate the claims. Critics asked why the same sort of due diligence was not applied to an earlier New York Times  story that claimed to show – with no concrete evidence – that Trump avoided paying taxes for decades. In fact, the Post story appeared to be the more legitimate sampling of journalism as it actually produced emails to back up its assertions. In the meantime, the media simply acted as though the story did not exist at all and the voting public was none the wiser.

This sort of meddling in the U.S. elections didn’t stop there. On Jan. 9, The Washington Post reported that then-President Trump, in a call with Georgia’s top elections investigator, Frances Watson, had instructed her to “find the fraud.” He mentioned that she could become a “national hero,” reported the paper. The only problem is that Trump said nothing of the kind. Yet the story, to which the Post provided a correction to only this month, had the effect of making it look as though the U.S. leader was trying to falsify the count. Those three examples of media meddling at a critical point in the campaign could easily have cost Trump the election. Unless something drastic changes, such brazen acts of interference against the Republican Party will continue to happen with impunity.

The American people are presently trapped in a Catch-22 situation in that any criticism that is levelled against the U.S. mainstream media is channeled away from social discourse by the very institutions under attack. Judge Silberman rightly viewed this as an encroaching form of tyranny that, if not checked, will spell the end of American democracy, if we have not passed that point of no return already.

“It should be borne in mind that the first step taken by any potential authoritarian or dictatorial regime is to gain control of communications, particularly the delivery of news,” Silberman wrote with astonishing candour. “It is fair to conclude that one-party control of the press and media is a threat to a viable democracy. It may even give rise to countervailing extremism.”

Therefore, before the right-wing of the political spectrum finally transforms into the beast of burden that the left now imagines it to be, best to balance the media scales before it’s too late. The very survival of democracy and the United States itself demands it. So which U.S. media company will be the first to tell the people?

(This piece first appeared in NewsNet).