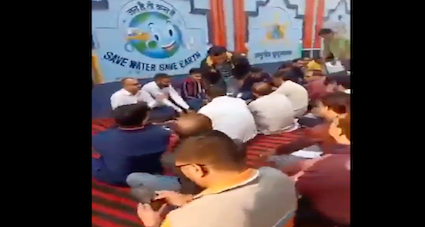 Hindus in order to mark their anger, gathered outside Christian Missionary school, St. Mary’s Public School, in Haryana and recited Ramcharitmanas as a means of peaceful protest.

The protest came after the St Mary’s School performed a ‘derogatory’ Ram Leela skit and allegedly hurt the religious sentiments. The students were seen parodying Sri Ram, Laxman and Maa Sita in front of a packed audience inside their school and with teachers standing on the side of the stage.

Sharing the video clip of the Ramcharitmanas protest on Twitter, one of the user wrote, “Such a graceful befitting reply by Hindus to St. Mary’s school that had made students perform mockery of Ramayan. Jai Shri Ram.”

The principal of the school Rajeev Sharma, later issued a letter apologizing “If the Ramleela Skit hurt anyone’s sentiments” after Hindu IT Cell and Social Media erupted in anger.

Last month also, a skit allegedly performed by first-year MBBS students of AIIMS allegedly went viral on social media in which they were seen using derogatory language, singing Bollywood songs and distorting the story of Ramayana.