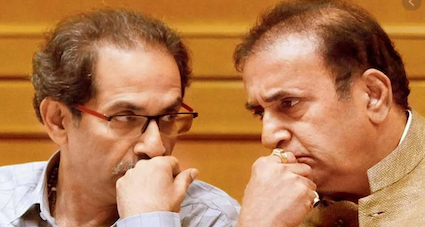 Maharashtra home minister Anil Deshmukh finally resigned after the Bombay High Court ordered a CBI probe against him on a plea by former Mumbai police commissioner Param Bir Singh but the plot appears to be only getting thicker.

Former Maharashtra chief minister Devendra Fadnavis, in the wake of Deshmukh’s resignation, fired two salvos: One, that Deshmukh had no option but to resign since after the CBI probe his staying on chair would’ve been a matter of constitutional conflict. Two, Fadnavis wondered what explains chief minster Uddhav Thackeray’s continued silence after the state has been rocked by arrests, transfers and now resignations of police officials and minister on issues which involve extortion charges, murder and bomb scare.

Fadnavis reacted thus today: “We had expected the home minister’s resignation would have have come earlier after Rashmi Shukla’s report (about alleged transfer bribes). We are astoned that in spite of such grave allegations against top police officers and mininsters, the CM has not spoken a single word. His silence is uncomfortable and his opinion should be aired.”

Fadnavis was confident that there would be many more names which would come out after the investigations. He also was keen to know who would become the next home minister.

“ If the MVA govt doesn’t decide who will hold the Home Ministry for 1-2 months, then there will be an impact on law and order. This govt betrayed the mandate and is going in three different directions. After 1.5 years, what I said is being felt by the people. Every party has its own agenda and will be taken down by the people itself. We only want to restore Maharashtra police and state’s pride,” he said.

Earlier a division bench of chief justice Dipankar Datta and justice Girish Kulkarni said this was an “extraordinary” and “unprecedented” case that warranted an independent inquiry.

“The CBI’s director is allowed to conduct a preliminary inquiry. Such preliminary inquiries be ordered in accordance with the law and be concluded within 15 days. Once the preliminary inquiry is complete, director CBI (will) be at discretion to (decide on) further course of action… We agree that this is an unprecedented case before the court…Deshmukh is Home Minister who leads the police… There has to be an independent inquiry… But, the CBI need not register an FIR immediately,” observed the high court.

Param Bir Singh had alleged that Anil Deshmukh had asked suspended police officer Sachin Vaze, who has been arrested by the NIA in the Mukesh Ambani bomb scare case, to collect Rs 100 crore every month, including Rs 40-50 crore from bars and restaurants in Mumbai.

Singh made the allegations in an eight-page letter to chief minister Uddhav Thackeray last month. He has also challenged the government’s order to transfer him from the post of Mumbai Police Commissioner.