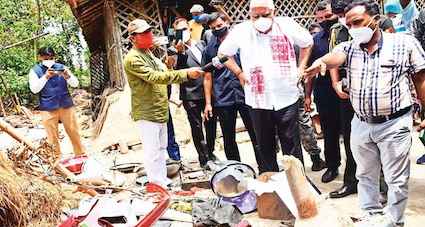 West Bengal governor Jagdeep Dhankhar, his voice choked, claimed that people of West Bengal were pleading to him they would “change the religion” to live.

Dhankhar visited Nandigram which bore the brunt of post-poll violence after chief minister Mamata Banerjee lost to BJP’s Suvendu Adhikari.  The governor met with Adhikari before interacting with families who have faced atrocities.

Cannot overlook such drifting from constitution @MamataOfficial. How can ruling party harmads be law unto themselves and be on such rampage with police @WBPolice and administration @HomeBengal no where to be seen ! pic.twitter.com/6Yi9M7bZ2s

The Governor was overcome with emotion as he told media about the ordeal of people who voted for the Bharatiya Janata Party (BJP) in the assembly polls.

“Enough is enough” he said and asked the West Bengal chief minister Mamata Banerjee must act and West Bengal police personnel be held accountable for dereliction of duty.

“Never ever imagined would face a situation @MamataOfficial where tearfully people will plead the constitutional head “will change the religion” to live!”

Never ever imagined would face a situation @MamataOfficial where tearfully people will plead the constitutional head ‘will change the religion’ to live !

Dhankhar said the people’s lives have been devastated unimaginably only because they “dared to vote.”

Dhankhar said Mamata Banerjee had “described the incident of firing by the Central forces in Cooch Behar’s Sitalkuchi (on April 10) in which four persons were killed as “genocide.” But she was silent about the situation in Nandigram. “Have you heard the cries and screams of the women and children in Nandigram where lakhs of people are homeless?” Dhankhar was quoted by Indian Express.

After his visit, the Governor has vowed that the constitution would be preserved, protected and defended.

Once the post-poll violence erupted, the Union home ministry sent a three-member team to evaluate the ground situation in West Bengal. Governor Dhankhar has expressed his anguish that the Chief of Police is yet to submit a detailed report.