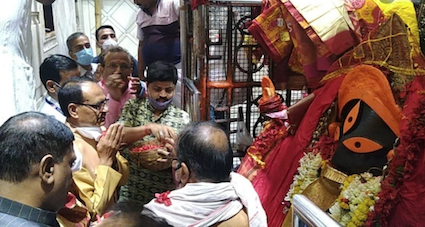 Chouhan, who arrived in Kolkata last night and would address public rallies today, told reporters after offering prayers at Kalighat Temple in Kolkata: “TMC didn’t let farmers and the poor benefit from the Centre’s policies. There is violence and corruption in the state.”

Chouhan attacked Congress and the Communists alongside TMC, the three parties who have brought West Bengal to the present sorry state of affairs.

“First, it was the Communists and Congress, who ruined Bengal and now TMC. Indeed, `2 May Didi-Gayi, BJP-Aayi (2 May Didi gone, BJP arrives).”

Chouhan has no doubt that BJP would clinch a “spectacular” victory in the forthcoming assembly polls. He also confirmed he would take part in the “Parivartan Rally.”

The assembly polls in Bengal would be held in eight phases. The EC apparently doesn’t want to take any chances with the law and order situation. But it has upset Mamata Banerjee a great deal.

“I respect EC’s decision, but why break-up the districts. South 24 Parganas is our stronghold, voting there will be held in 3 different phases. Has this been done as per Modi and Shah’s convenience?” the chief minister asked.

Below is the date-wise numbers of seats which would vote in Bengal assembly polls.

Besides announcing the polling dates, the ECI has also announced that it has appointed two special poll observers- Vivek Dubey and MK Das as well.