Didi has promised monthly stipend, would it be without ‘cut-money’?: Shah In Bengal 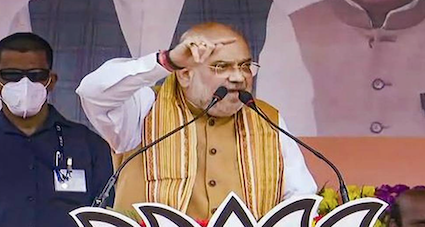 Addressing a public meeting in Purba Medinipur’s Egra in West Bengal, Union Home Minister Amit Shah slammed Trinamool Congress supremo Mamata Banerjee asserting that the BJP does not believe in vote-bank politics. Shah, in a dig at Mamata Banerjee over her “appeasement policies”, said on Sunday that his party, if elected to power, will ensure no one imposes any curb on religious practices.

“The BJP, after coming to power, will see to it that Durga puja and Saraswati puja are held without hindrance. No one will be stopped from organising any religious festival,” the home minister stated.

He further accused the Mamata Banerjee government of “encouraging infiltration” in Bengal.

“You were fed up with the Communists, and Didi promised you transformation. Has there been any change? Infiltration has continued, and there has been no change!” said Shah in his public address in Egra.

Claiming that over 130 BJP functionaries have been murdered in Bengal in recent times, he said “We will hunt down the killers from under the ground.”

From the public stage, he warned the TMC workers for allegedly carrying attacks on BJP cadres, saying that the goons of TMC should not think that they will be spared.

Belittling Banerjee’s monthly compensation promise of Rs 500 for every underprivileged person in the general category, Shah also sought to know if TMC leaders would seek “cut-money or commission” from the beneficiaries.

“The TMC men demand their share for every 5 anna (paise). I wonder if those close to ‘bhaipo’ (CM’s nephew Abhishek Banerjee) would seek cut-money before doling out Rs 500 every month to the general-category residents,” he said.

Shah also reaffirmed that the BJP will build ‘Sonar Bangla’ (golden Bengal) over the next five years, propelled by the partys double-engine government at the Centre and the state.

Meanwhile, the patriarch of Nandigram’s Adhikari family and TMC veteran leader, Sisir Adikari also joined the party and put up a formidable fight against West Bengal Chief Minister Mamata Banerjee camp to “save the honour of Midnapore”

The much-anticipated elections to 294-seats of the West Bengal Assembly are scheduled to be held from March 27 in eight different phases. The results will be announced on May 2.