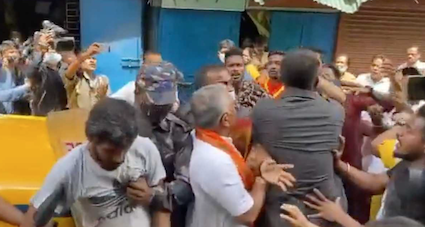 In a video posted by Ghosh, who is also a member of parliament from the Medinipur constituency of the state of West Bengal, some goons—alleged to be from Trinamool Congress—are seen attacking the security cordon of the BJP leader who are stretched to the limit in an incident which could’ve ended very badly for the national party’s leader.

Ghosh is seen trying to swing himself behind the security cordon yet the goons are seen coming in waves.

In the end, two security personnel have whipped out their revolvers in a bid to disperse the attackers, as seen in the video.

So disturbing is the video that the Election Commission has asked a report on the incident from the West Bengal government by 4 p.m this evening itself.

While Lutyens Media and some TV channels have tried to pass on the incident as a ruckus between the supporters of two parties, BJP and TMC, the video shows the BJP leader and its supporters seized from all corners by individuals with hostile intent.

BJP had chalked out a detailed plan for Monday to campaign in the Bhabanipur constituency where chief minister Mamata Banerjee is seeing re-election after losing out to BJP’s Suvendu Adhikari in the state assembly polls earlier this year.

Some 80 leaders at 80 locations across eight wards of Bhabanipur were out today in a massive outreach attempt by the BJP, “exposing how TMC and Mamata Banerjee’s misrule has eroded Bengal’s social, political, religious, cultural and economic capital,” as tweeted by BJP IT cell chief Amit Malviya.

Madan Mitra of Trinamool Congress later claimed that it was Dilip Ghosh and other BJP leaders who were threatening the voters even as the video showed it was the latter who was lucky to save his skin in the incident.

Priyanka Tibrewal is the BJP candidate pitted against Mamata Banerjee in the bypoll scheduled on September 30.