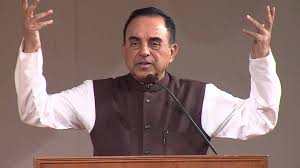 Dr Subramanian Swamy, Rajya Sabha member, is seeking a defamation case against the United National Under General Secretary Adama Dieng for ascribing a comment against Muslims to his name.

As per a letter by Dr Swamy to the Ministry of External Affairs (MEA), Dieng in a press release this week had accused the Indian MP of stating that Muslims are not equal to other citizens of India.

“There is no such statement by me either in the Parliament while the CAA was being debated nor in any interview I have given anywhere,” Dr Swamy has written in his letter.

Dr Swamy alleges that this alluding to statement seems to have emerged from an assertion by Pakistan’s Prime Minister Imran Khan in a press conference where he had relied on a statement by a media agency, called VICE, based in Toronto, Canada, and owned by a naturalized Pakistani.

Dr Swamy’s letter is addressed to MEA to seek a correction and apology from Dieng without having to send a court notice to him, Mr Swamy states further in his letter.