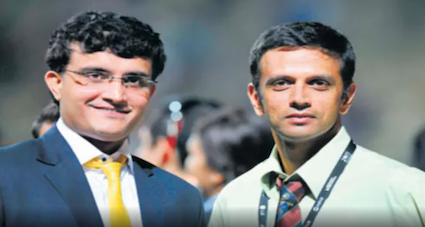 After rumours of Dravid agreeing to become the head coach of the Indian team went afloat, the Board of Control for Cricket in India (BCCI) president Sourav Ganguly has said that the move is far from being complete.

Speaking to Aaj Tak, Ganguly revealed that there’s no confirmation on Dravid taking over the head coach’s job after Shastri’s exit.

“There is no confirmation (On Dravid becoming coach),” Ganguly said.

Dravid presently is the director of the National Cricket Academy (NCA) in Bengaluru. The amount of travel that is required for the job would mean less family time which is something Dravid wasn’t in favour of initially.

The BCCI chief also said that due process has to be followed if Dravid is to become the team’s head coach. Ganguly himself had also spoken to Dravid about the role but the latter was not keen. While the offer still stands, Dravid has now asked Ganguly for some time to think before he takes a call.

“If he wants to apply, he will apply, the process has to happen. For now, he is the coach of NCA and I believe NCA has a big role to play in Indian cricket. I have spoken to him earlier about this as well and he was not that interested and I feel the situation is still the same. He has asked for some time, let’s see what happens,” Ganguly added.

It was also revealed that Dravid has been offered a sum of INR 10 crore + bonuses for the role. At present, Dravid reportedly earns INR 7 crore as the head of NCA.

“How many times do you see players Dravid, (Sachin) Tendulkar, (MS) Dhoni, (VVS) Laxman, and Virat Kohli coming up in one country in such a short span. They have to be utilised,” the BCCI boss said.