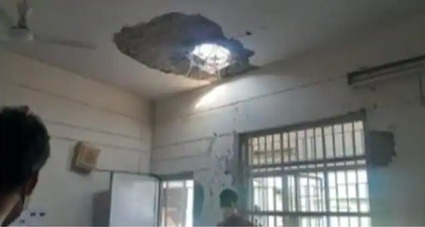 In a terror attack, two low-intensity blasts happened inside the technical area of the Air Force Station in Jammu within a five-minute interval on Sunday. The Indian Air Force patrol team saw the ammunition being dropped. So far two suspects have been detained.

As per reports, the attack was carried through two drones by terrorists. The first blast sound is captured on the CCTV at 1.37 a.m while the second was at 1.43 a.m.

While one blast damaged the roof of a building, the other exploded in an open area, said the IAF sources.

Jammu and Kashmir Director General of Police Dilbag Singh on Sunday termed the twin explosions at the high security Indian Air Force station in the Jammu airport a terror attack.

Further, speaking to India Today, he said the drone was operated by people near the attack site. The conspirators, he said, may have crossed the border but those who executed it were present within the border. It’s also unlikely that the drone attack could’ve been carried out from across the border and remain undetected given the distance between the Air Force Station and the border.

The drone dropped the bombs at a location close to the Helicopter hangar. However, the forces managed to intercept and thwart the second attack minimizing the damage.

“There is no damage to any aircraft in the blasts. Two personnel suffered minor injuries,” the Indian Air Force sources said to ANI.

The Jammu airport is a dual-use facility under the IAF control. It’s also used to operate passenger flights. However, it is learnt there was no disruption in flights.

The border is about 14 km from the Air Force Station. Reports claim that earlier too weapons had been dropped as far as 12 kms within Indian territory through drones.

This could be the first attack carried out against the country’s defence establishment. The technical area has been sealed as the Indian Air Force has begun an investigation into the matter.

In a separate incident, the police arrested a terrorist, said to be working for the Pakistan-based outfit Laskhar-e-Taiba, with an IED (improvised explosive device) that was planned for a strike in a crowded place.

The blasts took place hours before defence minister Rajnath Singh and army chief general MM Naravane were to begin a three-day visit to Ladakh to review India’s operational readiness and to interact with troops in the backdrop of a drawn-out standoff with China.