EC submitted with report: Mamata’s injury was “accident” and not an “attack” 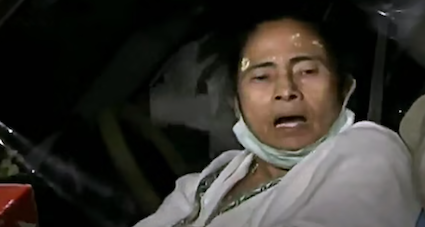 It is learnt that the Special Observer of Election Commission has submitted a report in which it has stated that the injury to West Bengal chief minister Mamata Banerjee was an “accident” and not an “attack” in Nandigram, planned or otherwise, as such.

As per TV9 Bharatvarsh, the Special Observer in his report has stated that no eyewitness came forward to claim that Mamata Banerjee was injured in an attack .

“The report submitted by the West Bengal government appeared to be quite sketchy and without any details of the incident like how it happened or who could be behind it. We have asked the state administration to furnish more details,” an official of the poll panel informed.

EC pointed out that although the report mentioned that a huge crowd was present at the spot in Nandigram when the incident happened and the CM’s leg was hit by the door, it does not mention how it happened.

Adding further to it, the EC has also asked the chief secretary to add details like how the incident took place and who could be behind it as the TMC leaders earlier even submitted a memorandum to the poll body highlighting how BJP leaders had threatened the CM through tweets and other remarks and alleging that it was not an “unfortunate incident”, but a conspiracy.

Also, it is important to note that the report does not anywhere talk about the incident of CM being pushed by anyone which was claimed by Mamata herself just after the few minutes of the accident.

The 66-year-old Banerjee, who was admitted to state-run SSKM Hospital here with “severe bone injuries”, was discharged from the medical establishment on Friday evening after doctors found her recovery to be “satisfactory”.

Meanwhile, Bhartiya Kisan Union (BKU) leader Rakesh Tikait landed at the Kolkata airport on Saturday where he received a welcome from Trinamool Congress Rajya Sabha MP Dola Sen. The farmer leader who had touted his timely visit to the state as an attempt to understand the grievances of the farming community in Bengal will also be addressing ‘Mahapanchayats’ in Nandigram and Kolkata in the run-up to the crucial assembly polls.