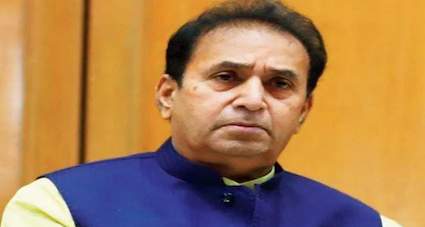 As per officials, raids are being carried out under the Prevention of Money Laundering Act (PMLA). The ED team arrived at Deshmukh’s Nagpur residence along with a huge posse of police and central police forces.

According to a report, the ED officials found a money trail of Rs 4 crore that was extorted from around dozen bar owners and was collected by assistant inspector Sachin Vaze, now suspended, over a few months and were diverted to Deshmukh’s account through several shell companies.

Sanjeev Palande is said to be a key witness in the case.

Following the incident, Bharatiya Janata Party leader Kirit Somaiya took a dig at Deshmukh, saying the Nationalist Congress Party (NCP) leader will be in jail in a few days.

He further alleged that Deshmukh had parked scam money in his family companies, adding that “Chhagan Bhujbal (NCP leader) was in jail for three years for a similar kind of scam.”

Earlier in April, the central probe agency had raided around 10 locations of 71-year-old Deshmukh in multiple cities. Previously, the Central Bureau of Investigation (CBI) had also conducted raids at four premises of Anil Deshmukh after registering FIR against him over allegations leveled against him by former Mumbai police commissioner Param Bir Singh.

Meanwhile, NCP MP Supriya Sule accused the Modi government of misusing central agencies. “The BJP accuses the Congress of Emergency excesses all the time,” she said. “What we are witnessing today has probably never been seen or heard. This is the first time I am witnessing this kind of misuse of central agencies against political opponents. This is a new SOP which BJP has come up with, it seems to be BJP’s style of operation.”