Entire crew of stuck ship in Suez Canal is Indian 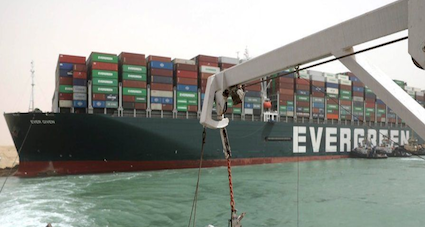 The entire crew of Ever Given, the container ship that is stuck in the Suez Canal since Tuesday blocking traffic in one of the world’s busiest waterways, is Indian and is safe, said Bernhard Schulte Shipmanagement, the company that manages the Ever Given.

As per media reports, the ship along with the Indian crew had two pilots from Egypt’s canal authority aboard the vessel to guide it when the grounding happened around 7:45 AM on Tuesday.

The operator on Wednesday informed that the ship was partially refloated and placed alongside the Canal bank.

The 224,000-tonne Ever Given got stranded while on the way from China to the Dutch port city of Rotterdam after losing the ability to steer due to strong winds and a dust storm.

So far, dredgers have tried to clear silt around the massive ship. Tug boats nudged the vessel alongside it, trying to gain momentum. From the shore, at least one backhoe dug into the canal’s sandy banks, suggesting the bow of the ship had plowed into it. However, satellite photos taken Thursday and analyzed by The Associated Press showed the vessel still stuck in the same location.

The technical manager of the Ever Given, said an attempt Friday to free it failed.

Plans were in the works to pump water from interior spaces of the vessel, and two more tugs should arrive by Sunday to join others already trying to move the massive ship, it said.

The significance of the Suez Canal for international trade can be understood from the fact that nearly 12 percent of global trade passes through this narrow canal connecting the Mediterranean Sea to the Red Sea. The canal provides the shortest sea link between Asia and Europe.