EVMs and VVPATs recovered from a Trinamool Congress leader’s home 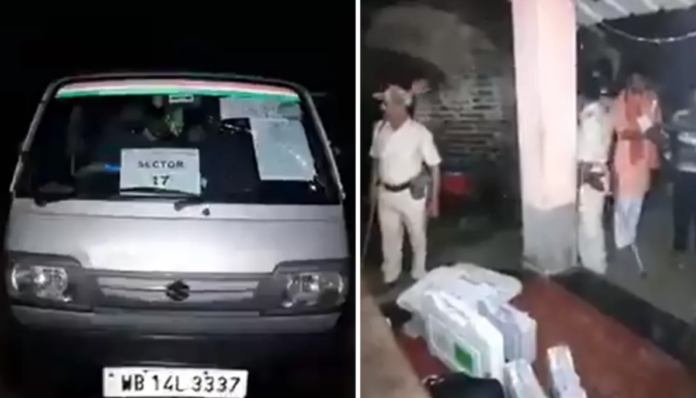 The third phase of elections in West Bengal were rocked by controversy after EVM and VVPAT machines were found at the resident of Trinamool Congress leader Gautam Ghosh at Tulsiberia in Uluberia north constituency last night.

The sensational recovery was made after a “Sector 17” election duty car was found outside the Trinamool Congress leader’s house. The visuals of the election duty car and police reclaiming machines have gone viral on social media.

It is learnt that one Tapan Sarkar, a sector officer, brought the EVMs and VVPATs to the residence of Gautam Ghosh in an election duty car. The sector officer was caught red-handed by the villagers.

The sector officer by way of explanation said that it was too late in the night and the central forces had slept off and refused to open the booth so they had to stay at a relative’s house for the night which happened to be the one of the Trinamool leader, Gautam Ghosh.

Later, the Election Commission informed that the EVMs and VVPATs in question were part of reserve stock and would not be used for voting.

The Election Commission has also suspended the presiding officer for storing the machines at the residence of Gautam Ghosh.

The situation turned ugly after the EVMs and VVPATs were recovered from the Trinamool Congress leader’s house and police had to resort to lathi-charge to put the crowd on its heels.

The third phase of polling in the West Bengal elections are presently underway and in all 31 seats are to be done with voting today. They are spread across three districts: South 24 Parganas, Howrah and Hooghly.

The first and second phase of elections were conducted on March 27 and April 1.

In the second phase of elections, several cases of violence and arson were reported in West Bengal. Mamata Banerjee’s bete noire Suvendu Adhikari’s convoy was attacked by alleged Trinamool goons Nandigram that day.

That day also marked the high drama of Mamta Banerjee parking herself in a polling booth in Boyal in the midst of elections in afternoon and staying put for a good two hours, claiming that tension outside was preventing her from leaving the booth. She also charged to the Election Commission, and to the Bengal governor Jagdeep Dhankhar that “outsiders” were voting and not “eligible” voters, a claim which was ridiculed by the Election Commission later and for which it is considering a severe punishment on Mamata Banerjee.