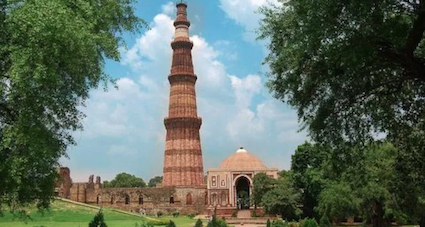 Former Archaeological Survey of India (ASI) Regional Director Dharamveer Sharma has said to a newspaper, that Qutub Minar was actually Surya Stambh. He claimed it was not built by the Mughals but by Emperor Vikramaditya. He further said that the structure was not built in parts as the historians suggest.

Sharma said the tower was an observatory to count constellations. There are 27 binocular locations in the Minaret to calculate 27 constellations. He further claimed that on the third floor of the Minaret, there is a mention of Surya Stambh.

Dharamveer Sharma is one of the most respected archaeologists in India. He has served as Superintending Archaeologist in the Delhi division of ASI three times. As per his claim, he had worked extensively on the conservation of Qutub Minar and went inside the Minaret multiple times. He said he had seen Devanagari writing in the inner parts of the minaret. Every year on June 21, he takes astronomers to the complex.

Sharma said that based on the archaeological evidence, Qutub Minar used to be a large observatory, and it was built by Emperor Vikramaditya. He presented a 20-point fact sheet to prove his theory that Qutub Minar was an observatory.

It was learnt recently that National Monuments Authority (NMA) had asked the ASI to retrieve two Ganesha idols placed in the Qutab Minar complex. The two idols, called Ulta Ganesh and Ganesha in cage, the NMA chairman wrote should be relocated to the National Museum. He believed that the “placement of the idols is disrespectful.”

In December 2021, a Delhi Court had rejected a plea to restore 27 temples destroyed to build Qutub Minar Complex. The court accepted that the temples were destroyed, however, the court had refused to admit the petition because it was scared of “disturbing peace”.