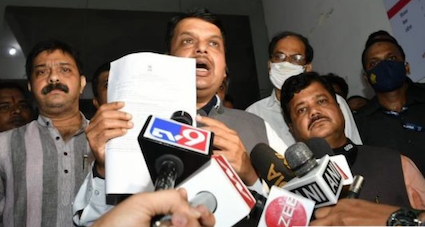 They said that Devendra Fadnavis, the BJP leader and ex-Maharashtra chief minister, was facilitating “illegal” shipment of Remdesivir to Gujarat. They said that the Redmesivir manufacturer was hoarding the drug illegally. Well, now one of their own has admitted that there was nothing illegal about it and the drugs were meant for Maharashtra only.

Dr Rajendra Shingne, Maharashtra Food and Drug Administration minister and NCP leader, has admitted to News 18 that the Remdesivir procured by BJP was indeed intended for the Maharashtra government and he was aware of it.

“I was aware of it. The BJP leaders had met me at my house along with the manufacturers’ representatives. They offered to help us procure the Remdesivir stocks for the state government and I agreed to it. The entire process was done following all rules, with due permissions and with genuine intentions to help the citizens,” said Shingne to TV channel.

“60,000 vials of #Remdesivir arranged by the #BJP were intended for the Maharashtra Government.
The entire process was done following all rules, with due permissions and with with genuine intentions to help the citizens.” – FDA Cabinet Minister Dr. @DrShingnespeaks ji pic.twitter.com/cI260gWi6d

Further, Dr Shingne confirmed that the injections could not be used for any other purpose and that he was assured about the same by the BJP leaders.

Now before the background of the controversy is shared again, let’s look at what leaders of ruling Maha Vikas Aghadi said on the matter.

Priyanka Chaturvedi of Shiv Sena had accused BJP of hoarding Remdesivir. She has been all over TV channels, especially on NDTV.

If this isn’t backstabbing the people of Maharashtra for his cheap politics then what is?
A leader of opposition is hoarding an emergency drug procured secretly&when seized fights with Mumbai Police.
Shame Mr Fadnavis.
Your midnight shenanigans were exposed once and now again. https://t.co/w8qynzA3DP

Saket Gokhale, the habitual liar of Congress sympathizer, actually filed a complaint with the state home minister Dilip Walse-Patil against Fadnavis in connection with the “illegal hoarding” of Remdesivir.

NCP’s Nawab Malik is similarly giving interviews in a bid to pin down Fadnavis. He had also alleged that the Centre gave permission to one of the export companies to supply Remdesivir to the state of Gujarat only.

Here is the another proof of step motherly treatment given by central government to #Maharashtra.
This is the approval letter to one of the export companies to supply stock of #Remdesivir to the state of Gujarat Only.
Can this double standards be explained ?@ANI @PTI_News pic.twitter.com/p2It2JHkMy

It all began when the Mumbai Police held a director of Bruck Pharma—a Daman-based manufacturer of Remdesivir for allegedly “hoarding” the critical drug in his storage facility. He was let go after Fadnavis interred with relevant papers. Fadnavis, along with Darekar, had to spend hours at the police station to sort out the matter. They explained to police that the Maharashtra Food and Drug Administration (FDA) had permitted the consignment.

Despite police later clarifying that they found the papers legal, the MVA leaders didn’t stop in mud-slinging Fadnavis and the BJP.

When Maharashtra is battling Covid-19 pandemic, instead of putting their best foot forward, it appears that a few in MVA can’t think beyond politics.

Rahul Gandhi visited Punjab today. And he got a jolt when five out of the eight Congress Lok Sabha MPs boycotted his visit to...

Now a forced conversion to Islam: A female journo’s charge against a channel owner

Has Buddhadeb Bhattacharjee lied he wasn’t contacted for Padma Bhushan?

Radheshyam Khemka, the man who ran Gita Press: A Padma Vibhushan not too soon