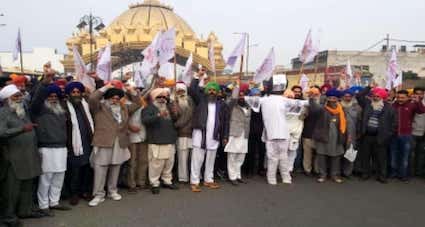 The farmers’ agitation against the historic farm laws would lead to a loss of over Rs 600 crores in toll collection, credit rating agency ICRA Limited has said.

In a report, ICRA noted that around 52 toll plazas, including both public-funded and BOT (built, operate and transfer) for national highways are operated in Punjab, Haryana and Delhi-NCR which are directly or indirectly affected due to these protests,” it noted.

The revenue loss to toll plazas has furthered worsened since December 12 last year, due to no-fee collection from vehicles at all toll plazas in Haryana, Punjab and Delhi-NCR region. ICRA Limited reported that the average toll collection, prior to the protests and the subsequent free vehicular movement, was around â‚¹7 crores each day.

In its report, ICRA Limited emphasised, “Almost 50% of the NH toll plazas (26 out of 52 toll plazas) in Punjab, Haryana and Delhi-NCR constitute the BOT projects. The debt outstanding for these 11 projects is estimated at â‚¹9300 crores. Of these, three are rated by ICRA. Out of the â‚¹9,300-crore of impacted rated debt, ~â‚¹8550-crore of debt is at high risk of default while Rs. 750-crore is rated at investment grade and have a low to moderate risk of default.”

The credit rating agency further said, “The inability to collect toll for a continuous period of 24 hours and exceeding an aggregate period of seven days in an accounting year due to agitations/ strikes would be considered as an indirect political event under force majeure…This would cover around 25% of loss of revenue incurred by the affected projects.”