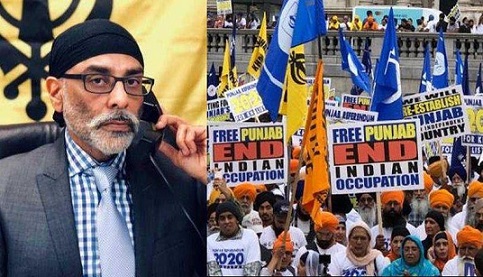 Pro-Khalistan Sikhs For Justice (SFJ) has extended support to the ongoing agitation by farmers. Its founder Gurpatwant Singh Pannu has announced a financial support of $1 million for the farmers who may have suffered losses while travelling to Delhi. Notorious Islamist organization Popular Front of India (PFI) has also pledged support to the agitationists.

In a video message, Pannu asked the farmers details of losses suffered by them, promising thag SFJ will reimburse them. The only card is that the farmers have been asked to join Khalistan movement. It is clearly an attempt to buy votes for a “referendum” his organisation has announced to free Punjab from India.

“Sikhs For Justice has announced $1 million for the farmers of Punjab and Haryana. The funds will be given to those who got injured or faced any losses while travelling to Delhi,” Pannu said in the video. He also urged the farmers to calls to SFJ on Guru Parb, the day of 551 birth anniversary of Shri Guru Nanak.

It is pertinent to mention here that SFJ is funded by Pakistan and considers Haryana to be a part of Khalistan. SFJ termed the new farm laws passed by the Indian government as a “colonial agenda to ultimately turn the farmers landless”.

Netizens noticed Pannu’s video running as an advertisement on YouTube which is against the Google Advertiser Policies. Some of them drew the attention of Information & Broadcasting Minister Prakash Javadekar to it.