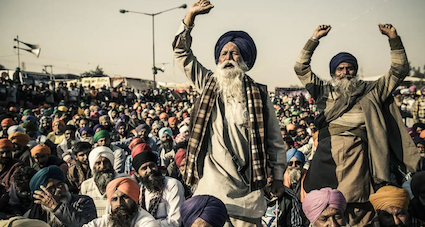 The protesting farmers have decided to end their year-long movement after Centre accepted all their demands, including withdrawal of agitation-related cases and compensation to the families of farmers who had died during the course of the moment against the contentious agriculture laws.

They have announced they would return home on December 11. The farmers’ unions have planned a fateh ardas (victory prayer) at 5.30 p.m today, and a Fateh March (Victory March) at Singh and Tikri protest sites on Delhi’s borders on December 11 around 9 a.m.

Sources have said that Punjab farm leaders plan to pay obeisance at the Golden Temple in Amritsar on December 13. The Samyukta Kisan Morcha, or SKM, would hold another meeting in Delhi on December 15.

The Centre had sent a written draft proposal to the SKM’s five-member committee yesterday.

The following were the demands of the protesting farmers:

1. Withdrawal of all the agitation-related cases registered during this protest in all states and Union territories, or under central government agencies, etc.

2. Compensation to all the families of the agitating farmers who died during the course of agitation.

3. No criminal liability to farmers in the cases of stubble burning.

4. The government has to discuss the Electricity Amendment Bill with the SKM or with other farmers’ unions before bringing it up in Parliament.

5. A committee to discuss minimum support price (MSP) is to be formed; the SKM will list out their members in the panel and provide it to the farmers.

6. The ongoing policy on MSP and its procurement in the country will continue as it is.

The Haryana and Uttar Pradesh state governments, along the lines of Punjab, have also agreed to provide a compensation of ₹5 lakh and a job to the kin of deceased farmers. Finally, the demand to include only SKM leaders in the MSP committee – apart from officials from the states, Centre, and agricultural experts – has also been met.

Earlier, the farmers were also demanding that Union minister Ajay Mishra, whose son Ashish has been tried in the Lakhimpur Kheri violence case, be sacked. However, judging by the last demand proposal sent to the Centre, the SKM’s five-member panel had removed that point.