Finland to apply for NATO; likely to join in next few days 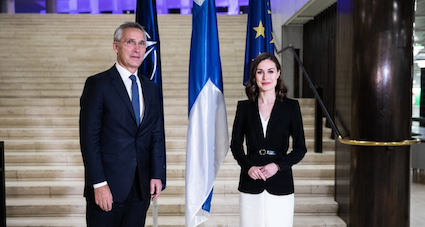 Finland declared on Sunday that the country intended to apply for membership in NATO, paving the path for the 30-nation Western military alliance to expand amid Russia’s conflict in Ukraine.

The announcement was made at a joint press conference held by Finnish President Sauli Niinisto and Prime Minister Sanna Marin at the Presidential Palace in Helsinki. The decision is expected to be approved by the Finnish Parliament in the next few days. Following that, a formal membership application will be filed at NATO headquarters in Brussels, most likely next week.

As NATO member states are ready to ratify Finland and Sweden’s membership applications as quickly as possible, the accession could take only a few weeks.

Following a meeting of NATO foreign ministers in Berlin, German Foreign Minister Annalena Bearbock said that Germany has prepared everything for a swift ratification procedure. She further claimed that other ministers also agreed to ratify the treaty quickly.

Ukraine’s Foreign Minister Dmytro Kuleba stated that Ukraine will join the EU and will be granted candidate status shortly. The Minister added that during his visit to Berlin, he had a very good conversation regarding Ukraine’s accession to the European Union with leaders from the German government.

He believes that Germany now has the opportunity to make a historic decision and avoid political blunders, stating that the German elites have a simple choice, either lead this process and write their names in European history, or it will happen regardless of their leadership.

Serbian President Aleksandar Vucic has stated that Serbia has paid a high price for refusing to endorse Western sanctions against Russia. On Sunday, the Serbian President said that seven American producers and performers declined to come to Serbia because the country did not impose sanctions on Russia. He stated that they know what sanctions are and how dishonest and pointless they are.