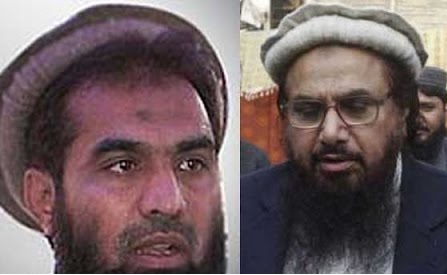 Mumbai was attacked by Lashkar e Taiba (LeT) terrorists on 26/11/2008 and 166 people had lost their lives then. The attack was masterminded by Zakirur Rehman Lakhvi and over 12 years later now, he has been arrested in Pakistan by Counter Terrorism Department (CTD). Declared a global terrorist over a decade ago by the UN, the US and the UK, he roamed free in the country all these years.

Incidentally, that never effected successive governments that ruled Pakistan as they continued their policy of using terror proxies as strategic assets. Lakhvi’s arrest now is attributed to its attempts to hoodwink the Financial Action Task Force (FATF). It had put Pakistan in grey list in June 2018 and it stays there till February when a review is due.

Out of 27 key result areas given by the FATF, Pakistan has complied with 21 points making no progress on six areas of concern. Lakhvi’s arrest is being directly linked by most Pakistani analysts to chances of the country getting blacklisted. With its economy already in dire straits, Pakistan would like to wriggle out of the grey list.

Earlier, LeT ideologue and chief Hafiz Saeed had also been arrested to show some progress to international community. Moulvi Masood Azhar, founder of Jaish e Mohammad (JeM), his brothers, and hundreds of foot soldiers of various terrorist organisations continue to move around freely with arms and ammunition.

Incidentally, JeM terrorists had carried out an attack on Pathankot airbase in the first week of January in 2016. A Pakistani team was allowed to visit the airbase and given all evidences the Indian side had collected. However, the team had labelled it as a false flag operation by the Indian security forces to give a bad name to Pakistan.

In September 2016, a military camp in border town Uri was attacked, again by some JeM cadres. This had led to the Surgical Strikes some days later on five terrorist camps in Pakistan Occupied Jammu Kashmir (POJK) by elite Special Forces (SFs) personnel. Despite that, there was no change in the Pakistani attitude and it led to the stunning attack of February 14, 2019, in which 40 CRPF personnel died at Pulwama.

Lakhvi’s arrest hardly changes anything on ground and not a dozen or so, but hundreds of others need to be arrested and disarmed by Pakistan. According to official Pakistani version, Lakhvi was collecting funds for financing terror activities by running a dispensary. It has also been said that a Lahore court is planning to start Lakhvi’s trial on terror charges soon.

Last month, a committee of the UN Security Council (UNSC) had allowed withdrawal of Rs 1.5 lakh per month to Lakhvi from his frozen account to meet expenses. Nothing is known as of now regarding any action contemplated by this committee for withdrawal of this order in the wake of his arrest.

With India joining the UNSC as a non-permanent member for two years a couple of days ago, it is expected that Pakistan faces closer scrutiny of its involvement in terrorist activities. The UN had designated Lakhvi as a global terrorist in December 2008 for being involved with LeT and Al Qaeda. The reasons given were his “financing, planning, facilitating acts” of these organisations.

The FATF had asked Pakistan to comply with its directions by 2019-end when it was put in the grey list in 2018. Obviously, this was not done and repeated extensions were given to it to do the needful. Even Lakhvi’s arrest now may turn out to be case of “too little, too late” and it falls far short of the country jettisoning using terror as an unstated state policy.

A couple of days ago, a goldsmith named Satpal Sharma Nischal was shot dead in Sarai Bala area of Srinagar city by terrorists of an organisation named The Resistance Front (TRF). According to various intelligence agencies, TRF is a only new name for LeT and JeM cadres operating in Jammu and Kashmir.

This is meant to spook and mislead the international community into believing that the LeT and JeM are not involved in terrorist activities in India. This is a part of the grand designs of Pakistani handlers of these organisations to continue terror activities uninterrupted. The driving force behind this thinking is to create a fog of confusion so that the truth may be hidden from those dealing with Pakistan’s terror records.