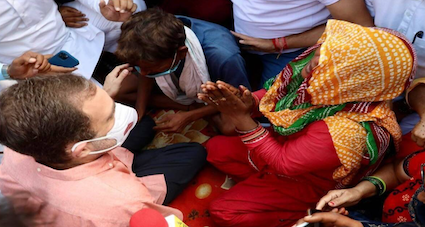 Congress Party, which claims itself to be a Dalit sympathizer has once again shared the image of the parents of the Nangal rape victims that had violated the POCSO Act and reportedly led to the suspension of the former party president Rahul Gandhi’s official handle.

Congress challenged the social media giant Twitter to lock their account as well, pointing out that ‘nothing’ would stop them from ‘fighting for injustice’ and ‘exposing the truth’.

The party also came up with a hashtag #à¤®à¥ˆà¤‚_à¤­à¥€_Rahul or I am Rahul to rally behind the Congress leader and challenge the social media giant.

“@TwitterIndia lock our accounts, we challenge you. Nothing will stop us from fighting for justice & exposing the truth,” the party wrote along with the screenshot of the tweet of Gandhi with a picture in which he is seen meeting the parents of the girl.

Section 228-A of the Indian Penal Code ban the disclosure of the identity of minor rape victims but Rahul Gandhi violated the same by sharing a photograph of his with the parents of the victim. Consequently, his account was locked.

Meanwhile, Congress has been targeting Bharatiya Janata Party, alleging BJP is intimidating Twitter, however, the party won’t dare to answer why Rahul Gandhi who demands justice for victims, cannot abide by the law.