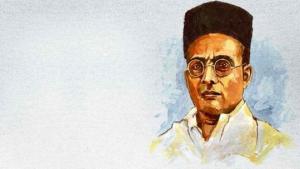 Veer Savarkar is not in public discourse. His portrait in Central Hall of the Parliament, unveiled in 2003 by Atal Behari Vajpayee, was the first stirring for his recognition.

(No surprises, Congress boycotted that moment. Sonia Gandhi stood with opposition in snubbing the event. The opposition had written to President A.P.J. Abdul Kalam to stay away from the function—he didn’t).

Be witness to the “Hate-Veer-Savarkar” moment in blogs and social media posts on his 135th birth anniversary on May 28. As the creator of “Hindutva” philosophy, the annual reviling of the man would be done in unison by TheLiars, Squint, Srolls and Duff-Posts; besides editorial pieces in “Journalism of Courage.” In essence, these hacks and compromised academicians would take recourse to five issues to revile the man:

Savarkar spent 27 years in jail and under prison-restrictions: between 1910-1937. He was sentenced to 50-year imprisonment and transported to the infamous Cellular Jail in the Andaman and Nicobar Islands (“Kaalapaani”) on July 4, 1911. In next decade, he wrote at least four mercy petition for his release. The Left-Liberal echo-chamber hold it as an evidence of his opportunism.

Let’s look at what Savarkar underwent while serving “Kaalapaani,” in the most inhuman jail of all. Prisoners were manacled; gruel to eat was riddled with worms; inmates, formed in groups, were chained like bullocks and hauled to oil mills, grinding mustard seed, for endless hours. Prisoners were flogged. Light was scarce. No talking between prisoners at mealtime. No contact with outside world. Those resisting food had a rubber catheter inserted through the nostril and into the gullet and so to the stomach. Medical aid was none. It was a precursor to Gulag Archipelago and Guantanamo bay prisons of our times.

Savarkar endured all this and much more. His badge was marked “D”—for Dangerous. He was subjected to unspeakable cruelties. Every time there was trouble in the compound, Savarkar was punished. The British were determined he must not be allowed to leave the prison alive.

(Before we proceed, let’s see how it contrasted with jails of pliable Congress leaders: it was almost a holiday vacation. We have the good word of none other than Asaf Ali: that Nehru almost had a bungalow to himself in his so-called jail with curtains of his choicest colour: blue.  He could do gardening at leisure; write his books. When his wife was sick, his sentence was suspended even without he asking for it! Nehru “graciously” accepted the offer).

As subsequent events were to show, there was a method in Savarkar’s mercy pleas. He didn’t want his life’s mission to rot away in prison and come to a grief as it happened to Rajput warriors in the past. Jaywant Joglekar, who authored a book on him, dubbed his clemency pleas a tactical ploy like Shivaji’s letter to Aurangzeb during his arrest in Agra.

After his release in 1937, Savarkar led a political movement to prevent the Partition of India as president of Hindu Mahasabha.

Savarkar’s stance to British was: ”Quit India but not Army.” Unlike Gandhi, he firmly believed “military strength” as key to India’s survival. He pledged Indian men as soldiers to British and helped Hindu-Sikh youths to join Indian army and thus reduce latter’s essentially Muslim-dominated numbers. It came handy during the partition or even when Pakistani raiders came up to Srinagar in 1947. But for these “secular” numbers, not just Jammu and Kashmir, event West Bengal, East Punjab or Delhi could’ve been overwhelmed.

It’s laughable to even suggest Savarkar worked for the British. After Second World War broke out, he wrote once and cabled on another occasion to US President Franklin Roosevelt, urging him to ask “Britain too to withdraw armed domination over Hindustani.”

Savarkar, and Dr. Bhimrao Ramji Ambedkar, were keen on Indianising the British-India army. This effort of his was endorsed by both Rash Behari Bose and Subhas Chandra Bose—the revolutionaries behind the Indian National Army (INA). Subhas Bose praised Savarkar in his broadcast from Singapore on June 25, 1944 “for fearlessly exhorting the youth to enlist in the armed forces.” Rash Behari Bose spoke thus in his radio broadcast: “In saluting you, I have the joy of doing my duty towards one of my elderly comrades in arms. In saluting you, I am saluting the symbol of sacrifice itself.”

It was INA which forced Britain’s hands to quit India.

Further, Bhagat Singh and Sukhdev had made “Life of Barrister Savarkar” a necessary reading for revolutionaries, as their associate Durga Das Khanna was to reveal in 1976. The book was clearly anti-British.

3- SAVARKAR HAD A HAND IN GANDHI’S MURDER

Savarkar was 14 years younger to Gandhi. But his vision was far clearer. He asked for complete independence in 1900; Gandhi’s demand only came in 1929. It was Savarkar who first made a bonfire of foreign clothes in 1905; his movement against “untouchability” was stunning as even his critics admit.

Savarkar was a fierce critic of Gandhi. He termed Gandhi a hypocrite for the latter had supported use of violence by British against Germany during World War 1. He was also critical of Gandhi’s Muslim appeasement during Khilafat movement.

In his articles between 1920-1940, Savarkar considered Gandhi a naïve leader who “happens to babble…(about) compassion, forgiveness”, yet “notwithstanding his sublime and broad heart, the Mahatama has a very narrow and immature head.”

As for his hand in Gandhi’s murder, he was honourably acquitted by the court.

4- SAVARKAR BEGAN HINDUTVA AND WAS ANTI-MUSLIM

It was Savarkar who expounded the philosophy of Hindutva in the book by the same name in 1923. But his Hindutva espoused Hindu-Muslim unity. He was against the Partition; believing Muslim should stay in India as Hindustani Muslims, just as they are alright with being in minority in Greece (Greek Muslims), Poland (Polish Muslims) and elsewhere.

He believed in a Hindu Rashtra which didn’t curb the religion of a minority in any way. But he was against “creation of a nation within a nation in the name of religious minoritism.” How true the words sound in today’s context. He once described his difference with Jinnah thus: “I stand for equality and no concessions while Jinnah is for more concessions and doesn’t stand for equality.” His view was not Hindus supremacy but that of Hindus’ protection.

5—SAVARKAR WAS A NAZI IN WORD AND SPIRIT

The critics must make up their mind whether Savarkar was  pro-British or pro-Nazi. He couldn’t be both at the same time. After all, he actively campaigned for recruitment in British-Indian army during WW 2. He supported the allied war effort against the Axis. He said: “After all, there is throughout this world…but a single race, the human race, kept alive by one common blood, the human blood.” Adolf Hitler, on the other hand, believed in the superiority of his race, the “pure race.” The truth is Savarkar believed in military strength which his shameless critics equate with support for Nazism.

What critics won’t tell you is that Vinayak Damodar Savarkar (May 28, 1883- February 26, 1966) was an atheist. He had asked his relatives to perform only his funeral and no rituals of 10th or 13th day as is done in Hindu faith. He was called Veer for when only 12, he led fellow students against a rampaging horde of Muslims that attacked his village in Nasik. He wrote several books, most of them while in jail.

Since his death, the airport at Port Blair has been named in his name. India House in England has a plaque in his name. In recent past, there have been calls to award him the “Bharat Ratna” posthumously.