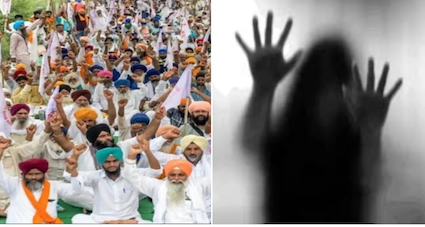 Farmers have been camping at Delhi borders since November last year, demanding the repeal of the Centre’s three farm laws. However, the protest site, which the Opposition, Left-Liberals and pseudo farmers are using for their petty political growth has turned into a breeding ground for illegal activities.

Zee Hindustan, in a massive string operation, revealed how Tikri Border that has been shut for the past six months due to protest has now become a hub of flesh trade, drugs and alcohol.

The reporter, disguised as a farmer, showed in the video how sex workers have set their camps near the Tikri Border. One of the sex workers even mentioned that alleged ‘farmers’ regularly pay visits to her and pay her anything between Rs 100-500.

It can be clearly heard in the video how a fake farmer is telling a reporter that whoever takes part in the protest gets alcohol, Rs 300 per day and sex.

That “farmer” even claimed that these farmers, after getting drunk, make video calls back home to insist their families to come to the borders.

A farmer protestor in intoxicated condition can also be seen lying on the roadside. A local resident informed the reporter how these protestors are creating nuisance in the neighbouring areas.

Earlier also, a farmer, in an interview with a news channel had revealed how Kisan Morcha leader Rakesh Tikait has called fake farmers for Rs 300. “The ones sitting at the borders are all there for drugs,” he added

Meanwhile, SHO Vijay Kumar has informed that police will initiate the investigation into the matter and will take strict action against those who are involved in the flesh trade.

The farmers’ agitation has lost its legitimacy because of the violence and illegal activities. Their sole intention is to disrupt trade and commerce and cause inconvenience to the people. However, it’s time to identify the culprits and unleash the power of the law on them.