Flouting Covid-19 rules and being brazen too: Trinamool Congress style! 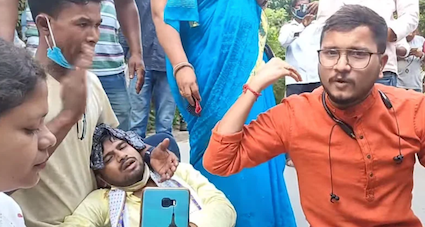 Trinamool Congress (TMC) has shown its fractious face once again when its national general secretary and MP Abhishek Banerjee lashed out at Tripura’s chief minister Biplab Deb stating that all of BJP’s resources will fall short in state.

His comments came after 14 leaders and workers of Trinamool Congress were arrested in Tripura’s Khowai district for violating Covid-19 norms by travelling after the imposition of a night curfew at 7 pm.

However, Banerjee who also happens to be nephew of Bengal’s CM Mamata Banerjee, instead of questioning his party MPs for violating Covid norms, slammed CM Biplab Deb administration. He also warned that if Biplab Dev feels that “Tripura is someone’s ancestral property, then he is mistaken.”

Abhishek Banerjee visited Khowai on Sunday amid tight security arrangements to meet the 14 arrested TMC leaders and workers. Banerjee spoke to lawyers and ensured bail for the arrested party workers. He then accompanied them to the court, which granted bail to all the TMC workers and leaders against a local security bond of Rs 50,000.