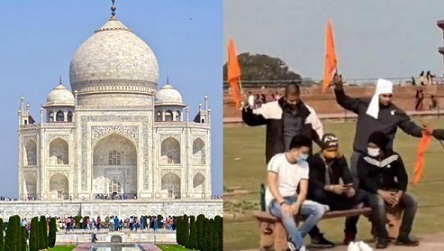 Four men in Agra have been arrested for unfurling the saffron flag and chanting Shiv Chalisa on the premises of Taj Mahal. The men are identified to be members of the Hindu Jagran Manch. As no religious or promotional activities are allowed inside the premises, the incident was considered a security breach.

Due to coronavirus, the visitors were not checked physically which is why the members were able to take flags with them inside the premises.

One of the arrested youths has been recognized as Gaurav Thakur, district president of Hindu Jagran Manch. Necessary legal actions are being taken against all four accused, Tajganj police station Inspector Umesh Chandra Tripathi said.

Along with him Manvendra Singh and Vishesh were also arrested- they entered from the eastern gate with a bottle filled with Ganga Jal and saffron flag in the pocket.