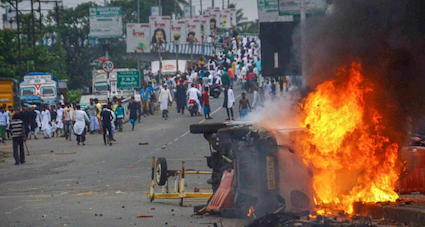 Fresh clash erupted in Panchla Bazaar area of Howrah, West Bengal as police and protestors clashed while the BJP office in Raghudevpur was vandalized.

The administration has imposed Section 144 CrPC in and around the stretches of national highways and railway stations till June 15.

Internet services have also been suspended in Howrah till Monday.

On Thursday, a national highway was blocked for 11 hours and tyres were burnt, disrupting the traffic.

The next day violence erupted in Howrah and Murshidabad. Protestors resorted to stone-pelting and set properties, vehicles on fire.

BJP’s Suvendu Adhikari said that vandalism took place at Beldanga Police Station under Murshidabad Police district. In a series of tweets, he shared videos and images of violence and destruction in the state by protestors.

In a tweet, he wrote: “BJP party offices of Howrah Rural & Uluberia organisational districts and Raghudebpur have been either vandalised or set on fire. The law and order situation of WB has deteriorated overnight. Police are hand in glove with the perpetrators.”

Nero fiddled while Rome burned” & @MamataOfficial begs to hooligans when Bengal burns. WB Police Minister please wake up from your slumber. Vandalism is going on at Beldanga Police Station under Murshidabad Police district. If you are unable to control, seek Central assistance,” he said.

West Bengal BJP chief Sukanta Majumdar was today stopped by the police from visiting violence-affected areas in Howrah district. Majumdar said the police erected barricades outside his residence in New Town as he was getting ready to leave for Howrah.

Earlier today, BJP MP Saumitra Khan wrote to Union Home Minister Amit Shah, requesting him to deploy central forces in the state as the law and order situation had worsened in Bengal.

West Bengal Governor Jagdeep Dhankhar on Friday sought urgent update from the Chief Secretary over the ongoing protests and deteriorating law and order situation in the state.