Friends…enemies…friends…: This tie-up has more than nine lives 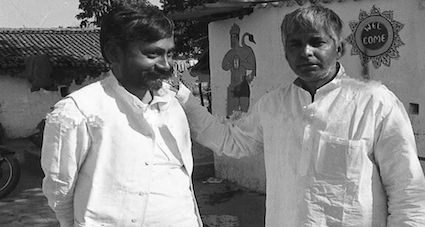 Nitish was responsible, in a minor way, for sending Lalu to  jail. The foes are friends again! Or are they?

When we were in school, we learnt that Mother Earth was a planet that revolves around the Sun, that the shape of earth is elliptical and it rotates around its own axis. We also learnt that every 24 hours, the earth completes a rotation.

In politics, the metaphor of ‘axis’ ‘rotation’ and ‘elliptical’ shape can be applied to the pair of Lalu Prasad Yadav and Nitish Kumar.

I will not trouble the readers with the chronology of years and exact dates but I will try and narrate the story of one time friends, then rivals, then enemies, then friends and then enemies, and finally friends again, in a lucid way.

I saw Nitish and Lalu at All Indian Institute of Medical Sciences. They looked like a shade younger than they look in the picture that I have taken from the NDTV website (above). No fat on their midriff and no stress on their face.

Nitish had a helmet in hand and Lalu had a Hindi newspaper folded like an umbrella and he held it tightly in his fist. The fist was clenched.

Lalu was once the President of his University and Nitish was elected as the General Secretary. Lalu always showed sometime patronising, sometime condescending attitude towards Nitish Kumar.  Nitish was happy to play along. He was Lalu’s aide then. But his heart yearned for a reversal of roles.

The friends gradually took separate lanes for stardom. Lalu was the early winner but Nitish was not to be left behind.. Lalu’s jungle raj of Bihar when he ruled as the CM is unparalleled. His henchmen could barge into a car showroom and take a new car for a spin or to a political rally, leaving the showroom staff petrified. His aides could dictate how the distribution of LPG cylinders would be done by the PSU oil companies during scarcity and his cadres could terrorise villagers to vote en bloc in favour of Lalu Yaday’s RJD Party

Nitish, once a loyal supporter of Lalu, teamed up with Sushil Kumar Modi (BJP’s former Dy CM under Nitish Kumar) and Ravi Shankar Prasad (the ex BJP minister and a renowned lawyer) to send Lalu to jail.

Nitish Kumar became an ally of BJP and from a little known leader of Samata Party, he became the biggest leader of Bihar.

On the tortuous path of political success, Nitish marginalised his own Guru, George Fernandes, whose association had given Nitish an aura of being incorruptible.

Who contributed the most to the rise of Nitish Kumar? The BJP of course. In the caste ridden politics of Bihar, Lalu had complete sway over Yadav and Muslim community. BJP and Nitish Kumar’s new party (JDU) ensured that Lalu’s hold over Bihar loosened once Lalu was sent to jail. BJP and JDU also came up with its own caste based matrix that when combined with good administration yielded good results during the elections.

Nitish Kumar was popular among non-Yadav OBCs and BJP had the support of the Rajputs and the business community. The Brahmins too came to BJP after they grew disillusioned under a Congress that had become irrelevant in the Hindi belt.

Nitish Kumar ruled Bihar for two terms with BJP playing second fiddle to it. But the arrival of Narendra Modi upset Nitish. He feared losing the Muslim votes once BJP became a Modi led party.

Muslims of Bihar had started voting for BJP-JDU combine as BJP’s top leader in Bihar, Sushil Modi, was considered a moderate by the community.  Nitish suspected that the Muslims would be weaned away if Narendra Modi was projected as the PM candidate for BJP (2014)

So Nitish went with a begging bowl to his friend Lalu, whom he was instrumental in sending to jail. He snapped ties with BJP, the party that contributed most to his career and stitched an alliance with Lalu’s RJD. He also befriended Congress that he once considered an enemy party that foisted emergency upon India. The basic civil rights of the citizens were suspended during the emergency and leaders like Nitish and Lalu were sent to jail for opposing the imposition of emergency.

It took Nitish a few years to realise that Lalu in jail was worse than a Lalu outside. Once Lalu’s RJD was in power with JDU, the hydra headed monster of corruption-nepotism-lawlessness raised its ugly head through Lalu’s supporters who were now led by Lalu’s two kids, both ministers in Nitish cabinet

After couple of years Nitish ditched Lalu and joined forces with BJP again. He won the elections again in partnership with BJP but now the saffron party had overtaken  Nitish Kumar in the assembly elections.

Even though BJP became a senior partner now, it remained committed to its pre-poll agreement and Nitish was the CM again.

Nitish was now overcome with a deep sense of inferiority complex and started blaming BJP for his reduced popularity among the voters. He feared that BJP was increasingly getting popular among the state’s OBC community that was the main voter base of Nitish Kumar. He feared decimation of his own vote share and this made him fickle and fidgety.

He has now ditched BJP and has now allied with Lalu’s children again.

Now on to my opening thoughts on rotation, axis and elliptical shape of earth.

As I said that the earth rotates around its own axis.  The axis between JDU and RJD is that of Yadav- Muslim-OBC castes.

The rotation is complete with Nitish going to bed with Lalu’s children again.

That leaves with the elliptical shape bit.

That is manifested in the tummy size of Lalu and Nitish. From being skinny politicians in their initial days, they now considerable elliptical mass around their waists.

Lalu has a bigger ellipse than Nitish Kumar. With the latest somersault, I am expecting Nitish to enlarge his girth considerably

(Dr Sudhir Bisht (PhD) is a long-time presence in national and international companies in oil retail sector as well as in Telecom infra sector. He has also been an author and a consummate writer in the digital world, including on rediff.com, for over two decades now)

How has Rahul’s “Bharat Jodo Yatra” gone so far?

Rahul Gandhi, the MP from Wayanad in Kerala, embarked on a Bharat-Jodo Yatra or Unite-India Journey a little over two weeks ago.  The name Bharat-Jodo...

Why business dynasties don’t figure in talks like the political ones?

In Tata Neu, I miss the Tata we know

If the ED could only show the mirror to our politicians