From Love Jihad to Sabrimala, Yogi tears into Kerala government 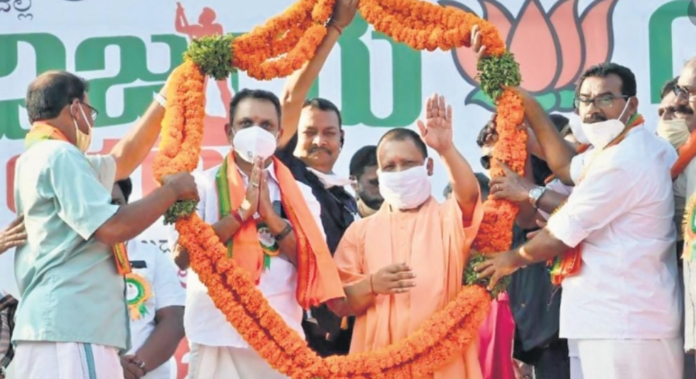 One has got to give it to Yogi Adityanath, chief minister of Uttar Pradesh. The saffron-clad leader pulled no punches on his visit to Kerala on Sunday as he nailed the Pinarayi Vijayan’s Left government in the state.

Addressing a rally in Kasaragod, Yogi pointed that the Kerala High Court in 2009 had addressed the issue of Love Jihad in the state. Yet, the successive governments in Kerala have done little to alleviate the suffering of not just Hindus but other minority groups in the state.

In 2009, Justice KT Sankaran of the Kerala High Court had dismissed the anticipatory bail applications made by two people who were indulging in Love Jihad activities, encouraging marriages between Muslim boys and girls of other religions. The court had said: “Under pretext of love, there can’t be compulsive deceptive conversion.” His state Uttar Pradesh on the other hand, said Yogi, has enacted ordinance stop stop Love Jihad, conversion of girls on the pretext of marriage. `

Yogi also touched on the subject of Sabrimala. “The government was hell-bent on changing the centuries-old tradition to hurt the sentiments of Hindus. He said the Kerala government had given a free hand to organisations to attack temples in Kerala.

The UP chief minister mentioned Halal Bank which was mooted as Sharia-compliant and launched to attract Muslims since interest is prohibited in Quran.

Yogi faulted Kerala government on other counts. He contrasted Kerala’s handling of Covid-19 with Uttar Pradesh, claiming 24-crore population of his state was far bigger than Kerala and yet it did hugely better than the southern state. The Kerala Model that was lauded by everyone didn’t work. “There was a time when Kerala government was laughing at UP administration in Covid-19 management, but now the world is laughing at Kerala for mismanagement.”

He said there are several Central government schemes, including Garib Kalyan Yojna and several others for poor, women and the marginalised yet they haven’t been implemented in Kerala. “Kerala deserves to take benefits from all these schemes,” he said. Damningly Yogi said the LDF government is receiving funds for the schemes from the Centre but using it to promote its own cadre by removing the name of the central government.” Further, the Jal Jeevan Mission is not only delaying the scheme but also trying to take credit for it by changing its name.

Yogi then listed the achievements of his government in Uttar Pradesh.

“30 medical colleges are being constructed..one crore households have been provided with electricity connection…two crore toilets were built in the last few years…over 10 crore beneficiaries have been registered already under Ayushan Bharat Scheme.

The UP chief minister said young people are leaving Kerala for other countries in search of jobs which is a poor reflection on the Kerala government. In contrast, UP has given four lakh jobs to youth in last four years.