From Merkel to Trump to Macron, all are greeting with a ‘Namaste’ 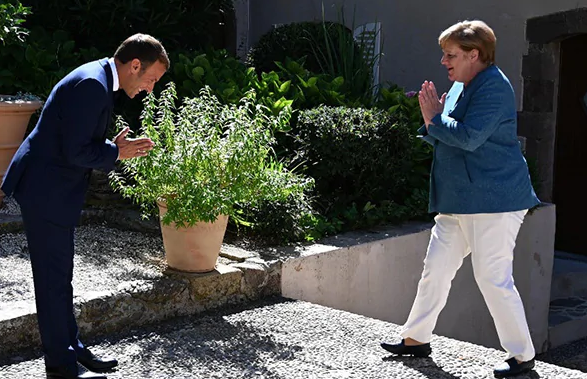 From French to German to United States—Emmanuel Macron, Angela Merkel and Donald Trump, everyone seems to have taken Indian prime minister Narendra Modi’s advice to heart. All are greeting each other with “Namaste” these days.

Modi had addressed the India Global Week 2020 thus “You would’ve seen Namaste has gone global as a form of greeting…India’s ancient culture and universal peaceful ethos are its strength.”

Macron has welcomed Merkel in France with folded hands—a “namaste”—and the German chancellor has responded in kind. The two were meeting at Macron’s Mediterranean holiday retreat, the Fort of Bregancon.

So was the case with Trump and Israeli prime minister Benjamin Netanyahu when they met recently. Both of them did a “namaste” to each other.

Netanyahu is quoted as saying: “Just avoid shaking hands as I do. You can try to implement the Indian style of Namaste or say another word like shalom, but find a way, any way of not shaking hands.”

It was in March itself when a video of Prince Charles, greeting people with a “Namaste” in London had gone viral.